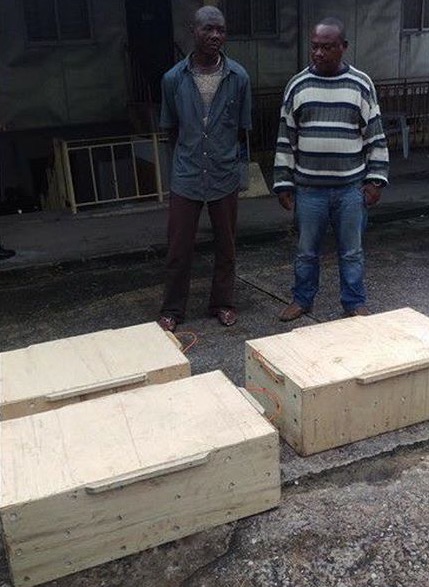 The Nigeria Customs Service on Wednesday intercepted three consignments containing 140 species of snakes and 660 other animals imported into Nigeria from Cameroon.

The containers were brought in aboard a Cameroonian vessel, MV Flesh, through the Calabar waterways to the National Inland Waterways Authority jetty in Calabar, Cross River State.

The other animals which were identified as geckos, millipedes, hairy frogs and spiders, were said to be worth about N6.9m.

She said the consignments, which were Lagos-bound, were prohibited items under the Schedule 3 of the Revised Import Prohibition List (Trade) in the Common External Tariff.

A packaging list of the items made available to our correspondent identified the species of snakes to include Atheris squamigera, Bitis gobanica, Dasypeltis ssp and Boiga pulverinata, while the geckos were Hemidactylus frenatus and Hemidactylus fasciatus.

The millipede, hairy frogs and spiders were of the Architreptulus, Trichobatrachus robustus and Arachnidae species respectively.

Without opening the containers to prevent the escape of the animals, Burromvyat  handed over the items and the two suspects arrested to the authorities of the Nigerian Agricultural Quarantine Services for further investigation.

She said, “These containers have animals of different sizes. They were brought in on July 24, 2017, through the Calabar waterways.

“There is no permit to bring live animals into the country. We have seized and we are handing the animals over to the Nigerian Quarantine Services for further action.

“I do not know what they want to do with them, but I think that the animals are dangerous because they include  snakes, spiders, geckos and other creatures. We have enough snakes around Nigeria already.”

The officer in charge of the Nigerian Agricultural Quarantine Services in Cross River State, Mr. Sunday Ukut, said the animals would be properly scrutinised after which they might be destroyed.

He said, “We will take them to the office and conduct further investigations. These animals came in without the necessary import papers and these are highly prohibited animals. So, we are going to carry out our own screening on them and possibly destroy them. They came in from Cameroon.”

The suspect who allegedly brought in the consignments from Cameroon, Mr. Julius Novigana, said they were given to him by a friend to deliver to someone in Lagos.

Novigana, a Cameroonian agent, claimed that he did not know what were in the three containers, adding that his friend only asked him to deliver the consignments to an unidentified person in Lagos.

“A friend gave them to me in Cameroon to deliver to someone in Lagos. I only have the man’s number in Lagos. I have called him and he said he would send someone to pick them from me in Calabar,” he said.

The Captain of the vessel that brought the consignment, Victor Agbor, also a Cameroonian, said he did not spot the containers when he was about leaving his country.

“I did not see these containers on the vessel when I left Cameroon. The name of my vessel is MV Flesh and we bring in passengers and general cargo from Cameroon to Nigeria.

“I never saw these containers on board before leaving.

“I was informed in Nigeria that there were some containers without manifestoes in the vessel. I do not have any idea about them,” he said.

Posted by Lawrencia at 6:17 pm
Email ThisBlogThis!Share to TwitterShare to FacebookShare to Pinterest
Labels: Crime