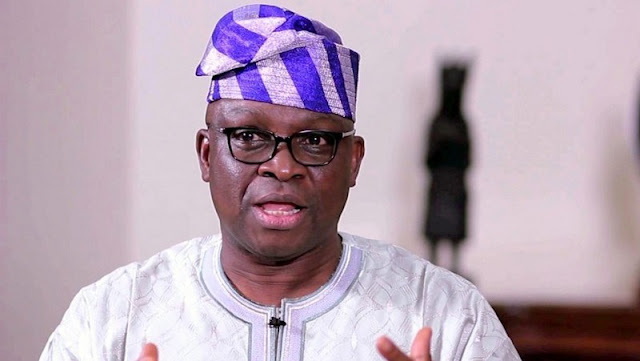 The Governor of Ekiti State, Mr. Ayodele Fayose, has threatened to release 11 pictures which he said would proof to Nigerians that President Muhammadu Buhari’s health had deteriorated.

Fayose said there was no iota of truth in the claim by Acting President Yemi Osinbajo  that the President was fast recuperating in London. The governor, who spoke with journalists in Abuja on Wednesday, insisted that the President should resign and attend to his failing health.

Fayose, who is the Chairman of the Peoples Democratic Party Governors’ Forum, however, said he was not praying for the President to die.

He challenged Osinbajo to show to Nigerians audio or still pictures taken with the President in London when he met him on Tuesday night.

The governor insisted that without the acting President showing either of these, Nigerians should not take the message by Osinbajo as the truth.

He called on the acting President to tell Nigerians what he saw when he visited Buhari.

“I have made the allegations and I have said it expressly that we are in the age of technology. So,  we have an Acting President of a nation that has visited his boss that cannot show evidence of the meeting.

“The pictures they are posting on social media are pictures taken long time ago. You recall that I said this again at Transcorp Hilton in 2015. We are talking about the President of 170 million people.

“The Acting President visiting the President that has left this country for about 60 days or more cannot show evidence of the meeting. It shows the President is in a critical condition.

“I wasn’t saying that we don’t want him to return, but the claim of the acting President is not true. In this age and time when we have the social media, we have everything to show that the government cannot be run by propaganda.

“The fact is, the President is sick, incapacitated and he’s not in good condition. The acting President should show us pictures, short video of his meeting with the President . It is not in the interest of the country that the country will be run in deceit and propaganda.

“The visit  (of Osinbajo) was diversionary and an  attempt to divert the attention of the country. Both the President and his vice do not have what it takes to run the country.

“As far as it is good to protect the interest of his boss, he should consider the interest of the people. We are no longer credit worthy. We cannot wait for a President that is incapacitated.”

Posted by Unknown at 10:31 am
Email ThisBlogThis!Share to TwitterShare to FacebookShare to Pinterest
Labels: NationalNews