Herbalist, Two Others Arrested For Circulating Fake $400,000 By Promising To Double N20,000 In Dollars. 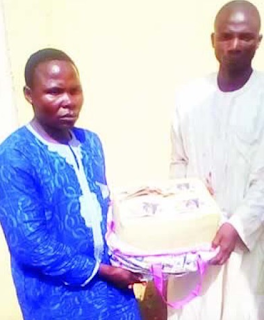 OPERATIVES of the Nigeria Security and Civil Defence Corps in Niger State have arrested a herbalist and two others for allegedly circulating fake naira and dollar notes.

The herbalist, Rabiu Abubakar, 36, and Sadiq Ibrahim, 30, from Kano and Zamfara States respectively were arrested alongside one Hussaini Hassan in Minna in connection with the crime.

The state NSCDC commandant, Mr. Philip Ayuba, who disclosed this to Northern City News on Sunday, said  Abubakar and Ibrahim were nabbed with fake $400,000 notes.

According to Ayuba, Abubakar had asked his victim to provide N20,000 which he promised to double in dollars.

The victim reportedly provided the amount, after which the herbalist handed him a carton and directed him not to open it until he got home.

The commandant said when the victim opened the carton at home,  it was filled  with fake American dollars with sawdust underneath the notes.

Ayuba explained that the second suspect, Sadiq, was apprehended at the bridge after Mobil Roundabout in Minna where he was waiting for a victim whom he had asked to provide N300,000.

The commandant said it was discovered that both Abubakar and Ibrahim were accomplices.

He said Hassan, who was arrested with N16,000 in fake N1,000 notes in Minna, was still being investigated.

“As soon as investigations are completed, the suspects would either be handed over to the police or charged to court,” Ayuba said.

Posted by Lawrencia at 9:42 am
Email ThisBlogThis!Share to TwitterShare to FacebookShare to Pinterest
Labels: Crime