I Have Fibroids, Not Cancer – Halima Abubakar 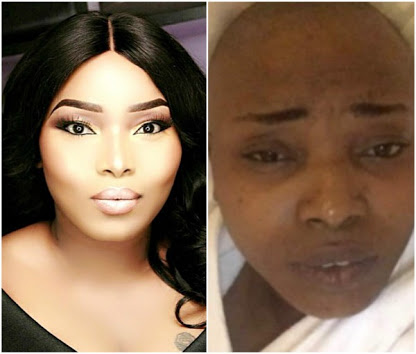 Contrary to news making the rounds that actress, Halima Abubakar has been diagnosed with cancer, her Ghanaian manager, Anah Abi, has said the actress is battling with complications from a fibroid removal surgery she had sometime ago.

In an exclusive chat with Sunday Scoop, she said, “Halima has shared a lot about what’s happening to her before in the past, so it is just natural for her to share this as well. She’s never scared to share anything that she’s going through. We thank God that she’s responding to treatment though she’s still weak but she has a lot of wonderful people around her. She would be having her next surgery in two weeks so for now, she has to rest. The information going round that she has cancer is totally false.

She already said it herself that it is fibroid. She has also thanked the Kogi State First Lady who has been very kind to her. She had complications from the initial fibroids operation that she had. We are grateful because a lot of people prayed for her and I believe that’s the essence of the post Tonto Dikeh made. Aside medicine, she needs prayers too.”

Speaking on the controversial social media post and picture by Tonto Dikeh, in which Halima was shown with her head completely shaven, which many took to mean the effects of chemotherapy used to treat cancer, Abi said, “Tonto is Halima’s best friend. She came to Lagos to shoot a movie and called Halima who then told her that she was in the hospital. Tonto immediately came to the hospital and took her to her hotel. She left the work she came for and spent time with Halima. People that have been praying for her should keep doing so and ignore the pictures. She is comfortable enough to be seen anyhow she is. Besides, Halima has posted worse pictures of herself, so there is no big deal in what Tonto posted.”

When Sunday Scoop sought to speak with Halima, our correspondent was informed that she was sleeping and couldn’t speak to anyone for now.

Posted by Unknown at 9:42 am
Email ThisBlogThis!Share to TwitterShare to FacebookShare to Pinterest
Labels: Gists