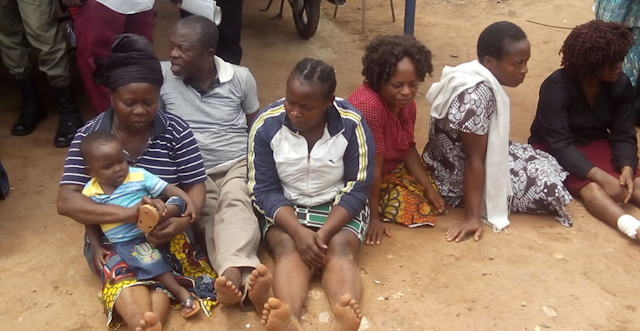 A 20-year-old woman, Chioma Fidelis, has confessed to selling her two months old son, Favour Fidelis, for a half bag of rice, three chairs, cement and the sum of N200,000.

Speaking to newsmen on Friday when she was paraded alongside her accomplices by the police in Imo State, the 20-year-old woman said hardship and the circumstances in which she got pregnant led her into the crime.

Fidelis who hails from Ehime Mbano Local Government Area of the state, said that she had no other option but to sell the child having realised that her baby was suffering from kwashiorkor, adding that she had no husband to take care of her and the child.

Miss Chidimma Unakalamba, who played the role of a middleman, had accepted that she sold the baby boy to Mr. and Mrs. Jonas Anyanwu, who were in dire need of a male child

Unakalamba also explained that the baby was sold for N600,000 to the couple.

But a mild drama ensued when the couple insisted that they paid N700,000 for the boy child.

Unakalamba owned up that he had to deduct N137,000 she spent on the child’s medical bills, gave the mother N200,000 and pocketed the remaining proceeds from the transaction.

The police also paraded the lifeless bodies of the three suspected armed robbers, who lost their lives in a gun duel with the police in Njaba Local Government Area of the state on Thursday night.

Saturday PUNCH learnt that the police arrested five other criminals, including, a warden, Emmanuel Anyadike,  at the Owerri Federal Prisons, for allegedly working for the gang from the prison.

Briefing newsmen at the command’s headquarters in Owerri, the state capital on Friday, the State Commissioner of Police, Chris Ezike, said that Temple Ogbonnaya, 21, from Nkwa in Abia State, Ifeanyichukwu Victor, 21, and Okey Mgborogwu, 23, from Obinwanne, Njaba Local Government Area of the state were shot dead by his men of the command.

He said that the feat was achieved due to the effectiveness of the whistle-blowing policy of his command, adding that his men were sharing information and mutual intelligence with members of the public.

Ezike said, “The mutual intelligence between us and the members of the public led to these breakthroughs. We have made major reshuffle at the command, which is equally bringing these successes.

“As we are approaching the busy period of the year, the men of the underworld are enforcing and we are seriously redoubling our efforts to make sure that we lock the state against them.”

He disclosed that one AK-47 rifle, 39 rounds of live ammunition, 47 magazines, two locally made revolver pistols and three live cartridges were recovered from the robbers.

Other 30 suspects were equally paraded by the CP for various crimes, ranging from armed robbery, cultism, kidnapping and child trafficking.

Posted by Unknown at 2:38 pm
Email ThisBlogThis!Share to TwitterShare to FacebookShare to Pinterest
Labels: Crime