Igbo Prefer Restructuring, The Elders Do Not Believe Leaving Nigeria Is A Reasonable Option – Ohanaeze Ndigbo 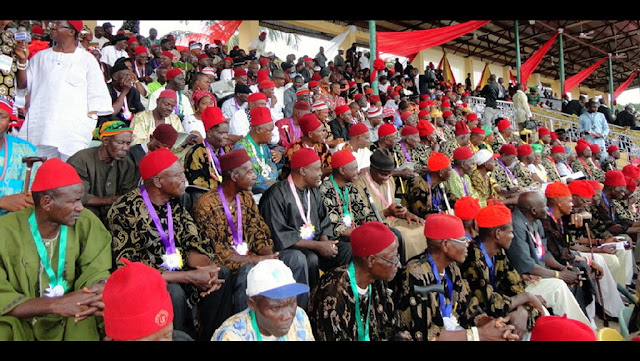 President General of Ndigbo apex organisation, the Ohanaeze, Chief John Nnia Nwodo has explained why the South East  is against break up of the country being canvassed by some youths in the zone .

He declared that what the Igbo want remains the  restructuring of the country in a way that everybody would be equally treated in line with the constitution .

Nwodo in a statement released shortly after meeting with a cross section of Igbo  leaders in Abuja on Friday stated  that no ethnic group has more stake in Nigeria project than the Igbo and as such cannot consider a break up as a viable option.

The Ohanaeze boss maintained  that there is no part of the country where Ndigbo have not invested their resources even without any corresponding investment from others in Igbo land. He said that while Ohanaeze understands and appreciates the circumstances that prompted the youth agitations under the MASSOB and IPOB platforms, the elders do not believe that leaving the country is a reasonable option at this time.

Nwodo said that the various segments of Igbo leadership comprising the Ohanaeze leadership, Governors, National Assembly members, traditional and religious leaders after deliberating on the situation in Enugu came to the conclusion that the restructuring option is the reasonable way to go.

He said that restructuring will bring Nigeria to a level where every person of whichever tribe, religion or class would have a sense of belonging and in return give in their best for the development of the country.

The release said the President General was in Abuja to meet critical stakeholders in the Igbo project to have their understanding and be on the same page with them.

Nwodo also announced that steps are being taken by the apex body leadership to carry along the youths of the region and ensure that the Ndigbo have a common and unified position on the way forward for them.

The Ohanaeze President insisted “that equal partnership, equal ownership and level playing ground for all is the right way to go to bring the best in our people and set the country on the path of growth and development.”

Posted by Unknown at 10:19 am
Email ThisBlogThis!Share to TwitterShare to FacebookShare to Pinterest
Labels: NationalNews