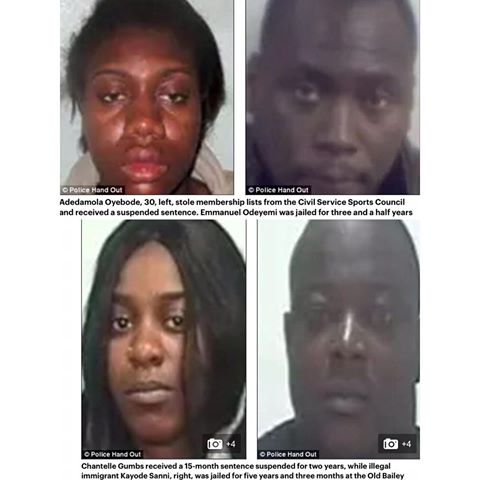 Kayode Sanni, 38, an illegal immigrant leading gang of Nigerian fraudsters who pretended to be MPs, police and even judges in £10million benefits scam, has been jailed for five years and three months for his part in the elaborate scam.

CSSC events manager Adedamola Oyebode, 30, stole membership lists and passed them on to her brothers-in-law Oluwatobe Emmanuel Odeyemi, 34, and Oluwagbenga Stephen Odeyemi, 39, who ran the fraud with Kayode Sanni, 38.

The gang managed to get away with £2,500,000 before staff at Her Majesty's Revenue and Customs spotted the 'extraordinarily high rate' of claims being made by civil servants.

Illegal immigrant Sanni 'lied through his teeth' and told jurors 'my conscience is clear' after denying involvement in the scam.

He was convicted after standing trial for one count of conspiracy to become knowingly concerned in a fraudulent act between 10 March 2009 and 11 June 2013. Sanni was jailed for five years and three months.

Sanni had expressed his remorse for the scam in a letter following his conviction.

Judge Dodgson rejected the conman's expressions of remorse, noting: 'He lied through his teeth.

Adedamole Oyebode, who worked for the CSSC between August 2008 and August 2010, has since admitted supplying lists of members and their details in return for payment.

The profits of the scam were then transferred out into either their own accounts or through Western Union facilities set up by Sanni and Emmanuel Odeyemi.

Jurors were told that two of the gang, Stephen Odeyemi and his wife Oluwatumininu Banjo, 40, have fled to Nigeria and are wanted abroad.

Sanni, of Moorland Road, Leeds, denied but was convicted of one count of conspiracy to become knowingly concerned in a fraudulent act between 10 March 2009 and 11 June 2013.

Adedamola Oyebode, of Knapmill Road, Bellingham, southeast London, and Chantelle Gumbs were handed suspended sentences, while Stephen Odeyimi of Grafton Road, Dagenham was jailed for three and a half years.

Oluwatumininu Banjo, of Grafton Road, Dagenham, and Stephen Odeyemi, of Palmer Avenue, Gravesend, are believed to be on the run in Nigeria.

Posted by Unknown at 11:45 am
Email ThisBlogThis!Share to TwitterShare to FacebookShare to Pinterest
Labels: InternationalNews