Our Relationship Was Based On Lies And Deceit. He Forced Me To Quit Music - Flavor's Ex-Fiancée, Beverly Laments 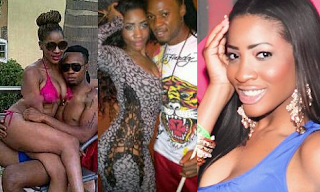 Singer Beverly Oh said this in a recent interview with NAIJ. On how she met Flavour, she said: "My relationship with Flavour was a bittersweet one. I met him in 2012 when he performed at a show in Houston, Texas, where I am from. 3 weeks after we met, he flew me to Nigeria, Enugu to be precise.

I met his parents and he proposed to me. I didn’t know why he was taking me to his parents so quickly at that time. My mum and aunts kept telling me to cover up and make sure I say "yes ma," "no ma" and all that stuff. He proposed and I said yes."

On the part Nigerian girls in the termination of their engagement, she said: "One of the issues we had was the fact that he was based in Nigeria and I was based in the States.

This was one of the things that allowed extra noise come into our relationship. We tried to spend time together, but if Naija girls have a plan for your man, they will follow through. This is why I think women need to be close to her man because men are so weak!"

On how he wanted her to quit her music career, she said: "He said that I should quit my career because our relationship wouldn’t work if there were two stars in the relationship."

Posted by Lawrencia at 6:51 pm
Email ThisBlogThis!Share to TwitterShare to FacebookShare to Pinterest
Labels: Gists