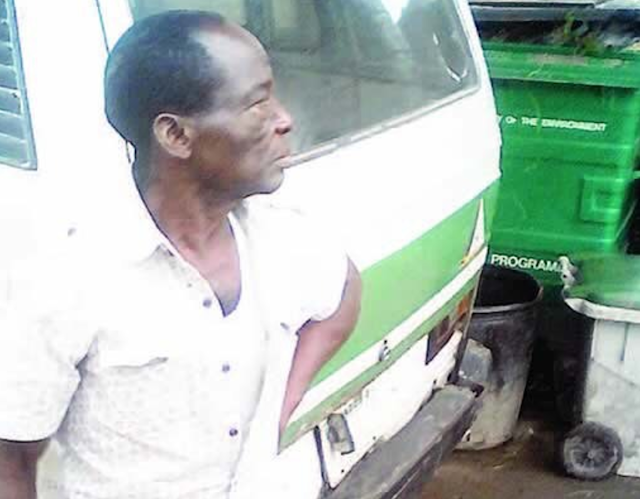 The General Hospital, Apapa, Lagos State, became a centre of public attention on Thursday as residents, motorcycle riders and passersby thronged the facility to catch a glimpse of three primary school pupils, who were allegedly defiled by a security guard.

The three victims, identified simply as Mistura, Yinka and Mary, had reportedly been admitted to the hospital for medical tests after the 60-year-old Togolese, Sabi Burno, was allegedly caught defiling 11-year-old Mistura in a container on Ibikunle Akintoye Street.

While Mistura and Yinka attend Methodist Primary School, Randle, Apapa, Mary is a pupil of United Christian Primary School. The two schools are in the same community.

The Togolese’s container-apartment is on an abandoned plot of land. The victims pass through the place to go to school every morning.

PUNCH Metro learnt that Mistura, who lives with her grandmother, had, while going to school on Thursday, gone into the container around 8am.

A landlord, whose house is beside the abandoned land, said he had observed her loitering in front of the container.

He said, “A hotel was on that land before it was demolished. The new owner asked the Togolese to guard it. The man put a container on the land, where he sleeps.

“He has been taking advantage of the girls since he got there about a year ago and I think no one suspected anything.

“But this morning, around 8am, I was in my house when I saw this girl, who was supposed to be in school, loitering in front of the container. She was in her school uniform.

“Not up to three minutes, the Togolese asked the girl to go in, while pretending to be sweeping. Within a few minutes, he also went in and shut the door.”

The landlord, who did not want to be identified, said he rushed to Methodist Primary School to report the incident.

PUNCH Metro learnt that the school’s head teacher sent a teacher with the landlord to the scene.

Our correspondent was told that Burno was caught in the act and was held by the teacher.

“A crowd quickly gathered and I alerted policemen from the Apapa Police Station, who responded swiftly. The girl was taken to her school and some female teachers checked her private parts and found semen,” the landlord added.

PUNCH Metro learnt that during interrogation, Mistura confessed that it was not the first time that the security guard slept with her.

She was said to have mentioned the names of her two friends whom the Togolese had been sexually assaulting as well.

Teachers at the school reportedly invited Yinka and Mary for questioning, and they confessed that the suspect had been defiling them as well.

Our correspondent, who visited the general hospital where the victims were undergoing treatment, met Mistura’s grandmother and other relatives.

She explained that the primary five pupil’s mother died while she was an infant, adding that the father’s whereabouts was unknown.

“I took her as my own child and I never knew she was being defiled. She goes to school in the morning and returns in the afternoon after which she comes to my shop to assist me. We were still together till 11pm yesterday (Wednesday). I never suspected anything. I gave this girl good training. I am disappointed,” she said.

A classmate of Mistura and Yinka told PUNCH Metro that the two girls always flaunted money in the classroom.

He said, “One day, Mistura showed me N1,200 and when I asked her where she got it, she became quiet. Yinka sometimes bring N500 to class. I don’t know where they get their money. They are friends. But they always come late to school.”

A teacher at Methodist Primary School, who spoke on condition of anonymity, confirmed the incident.

She said the pupils were noted for lateness, adding that the authorities did not suspect such a thing was going on.

“But the incident happened outside the school; it has nothing to do with the school,” she said.

PUNCH Metro learnt that some officials in the education district prevented policemen from the Apapa division from taking the suspect away.

“We got there almost immediately, but a woman said we should leave the matter because it involves schools. We waited patiently, but she insisted that they would not hand over the suspect to us, so we left them,” a policemen said.

A source said Burno, while denying the allegations, claimed he was impotent, adding that it was the reason his wife left him.

At the General Hospital, Apapa, our correspondent was told that the medical director was not around.

As of the time of filing this report, efforts to get a reaction from the state Ministry of Health, were abortive.

The Director of the Lagos State Domestic and Sexual Violence Response Team, Lola Vivour-Adeniyi, said the head teacher of the Methodist school informed the agency about Mistura’s case.

She said, “The head teacher informed us and we advised that she should take the child to a primary health care centre, where she can receive proper sexual assault treatment. We are also liaising with the police and have requested a duplicate case file for the Directorate of Public Prosecutions.”

He said, “The man said he did not have sexual intercourse with them, but he may have touched them indecently. Nobody has been there to prove whether it is true or not. There is currently an examination being done for all those involved. The suspect is in police custody and we are trying to establish a case of either child abuse or indecent assault based on the girls’ statements.”

Posted by Unknown at 10:38 am
Email ThisBlogThis!Share to TwitterShare to FacebookShare to Pinterest
Labels: Crime