Chimamanda Adichie Honoured With The ‘Doctor Of Letters’ Degree At The University Of Edinburgh, UK 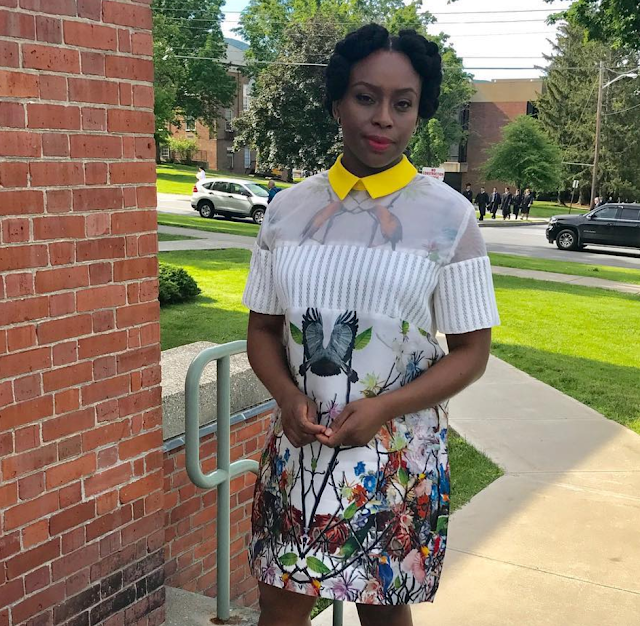 Ms Chimamanda Adichie, the young Nigerian accomplished writer and author has been honoured with the ‘Doctor of Letters’ degree at the University of Edinburgh Scotland, United Kingdom.

The honorary doctorate degree was presented to the writer by the university’s Principal and Vice Chancellor, Professor Sir Timothy O’Shea, at a special ceremony at the school’s St Cecilia’s Hall – Scotland’s oldest concert hall.

At the ceremony, O’Shea stated that the award was given in recognition of Ms Adichie’s achievements as an author and public intellectual.

Canadian Prime Minister Justin Trudeau on July 5, 2017 received a similar honorary doctorate degree in recognition of his achievements as a public servant with strong commitments to equality and diversity.

Following the award presentation, head of the Scottish government, First Minister Nicola Sturgeon, interviewed Chimamanda about her work and ideas at an event at Edinburgh International Book Festival in association with the College of Arts, Humanities and Social Sciences at the University.

Earlier in the year, Adichie was elected as a Foreign Honorary Member into the American Academy of Arts and Sciences and bagged another honorary degree from Haverford College, Pennsylvania in the United States of America in May 2017.

“It is lovely to be in this place, which is hallowed. I feel very fortunate to be included among the people who have been honoured with a degree from this University,” Adichie said.

Proposing Adichie for the award of the degree, Dr Barbara Bompani, Director of the Centre of African Studies, said there are many stories of the influence that Chimamanda Ngozi Adichie’s work has had on the lives, thoughts and creativity of others.

According to the director of the Centre of African Studies, Dr Barbara Bompani, Chimamanda, through her writing, advocacy and public engagement, “inspires all of us to better understand our own, and other peoples’ stories.”

During her visit, Chimamanda met with a group of African students participating in a scholarship programme at the university.

Posted by Unknown at 8:31 am
Email ThisBlogThis!Share to TwitterShare to FacebookShare to Pinterest
Labels: Gists