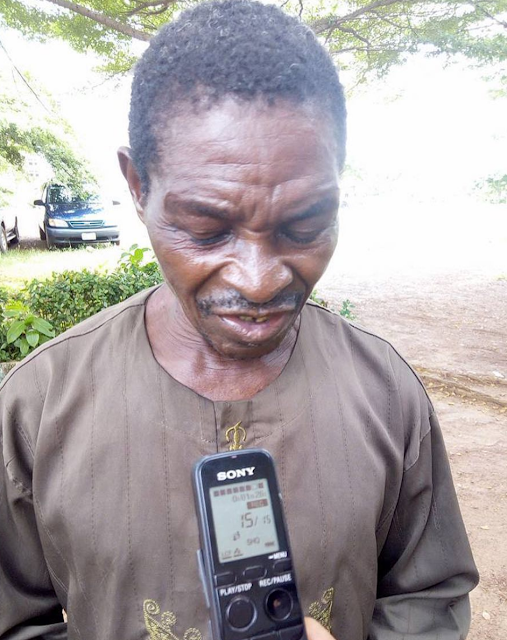 A 70-year-old man, Simon Alobu, has been arrested by the Ebonyi State Police Command, for allegedly raping a six-year-old girl in Akpoha Community, Afikpo North Local Government Area of Ebonyi State over the course of three years.

The arrest of the suspect was sequel to a petition written to the police by officials of the Ebonyi State Family Law Centre following a complaint lodged by a relative of the victim after the suspect allegedly confessed to the crime.

Saturday PUNCH learnt that the victim, an orphan, has lived with her aunt in Akpoha town since the death of her parents four years ago. The victim told our correspondent that the suspect lured her and her younger brother to his apartment. He then asked them to help him to prepare a meal, part of which he told they would also eat.

“After preparing the Garri (eba), my younger brother said that he did not want to eat and left the room. He immediately locked the door and raped me after which he used a razor to make a mark on my buttocks,” the girl said.

The victim’s aunt, Mrs. Martha Enya, explained that Alobu first raped her niece in 2014 when the victim was just three years old without anybody knowing.

She said, “I became aware of the first assault in November 2014 when the victim complained of pains in her private part, I asked her what happened, but she could not speak out. After examining her, I took her to a hospital in Afikpo where the rape was confirmed by doctors and she was given medical treatment.

“He sexually assaulted her again in 2015, 2016 and again this year. All efforts to make my niece disclose his identity failed until I took her to a church located in Enugu in August 2017 where she summoned the courage to disclose that it was Simon Alobu that had been raping her in the last three years.

“I raised the alarm in the village. This prompted the elders, youth and villagers to confront Alobu.

“He then confessed that he had been sleeping with the girl all these years. I reported the case to the Ebonyi State Family Law Centre, which then reported the matter to the police.”

Commenting on the case at the police command headquarters in Abakaliki on Friday, the Police Public Relations Officer, Lovet Odah, said the suspect was in custody at the command, and had confessed to the crime.

The PPRO confirmed that it was true that the suspect used a razor to lacerate the victim’s buttocks. He added that the command was ready to charge the suspect to court.

Odah said the moment the report of the medical test conducted on the victim was ready, the suspect would be arraigned.

Meanwhile, the wife of the Ebonyi State Governor, Mrs. Rachael Umahi, has expressed sadness over the incident and enjoined the police authorities in the state to ensure that a thorough investigation was conducted to bring the culprit to book.

Umahi, who spoke through her Press Secretary, Mr. Donatus Owoh, warned that her office would not condone any incident of violence against any girl-child in the state.

The Ebonyi State First Lady assured that her office would rehabilitate the victim through her pet project, Family Succour and Upliftment Programme.”

Posted by Unknown at 11:33 am
Email ThisBlogThis!Share to TwitterShare to FacebookShare to Pinterest
Labels: Crime