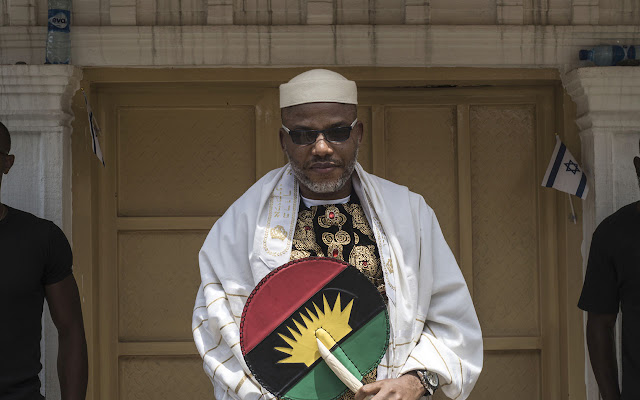 The police have increased the numerical strength of their personnel in the South-East and South-South zones of the country as part of measures to prevent a breach of the peace, which may result from the activities of Biafran agitators ahead of the upcoming Anambra State governorship election, Saturday PUNCH has learnt.

And apart from the Mobile Police Force operatives, the force told Saturday PUNCH on Friday that it had deployed the Counter-Terrorism unit, the Intelligence unit and other conventional policemen, who would work with the state commands in the South-East and South-South zones.

In addition, top sources in the police told Saturday PUNCH that the security agency had placed the leader of the Indigenous People of Biafra, Nnamdi Kanu, under surveillance to prevent him from fleeing the country should the court revoke his bail and order his re-arrest for allegedly flouting his bail conditions.


The Federal Government had last week asked the Federal High Court in Abuja to revoke the bail granted to Kanu, who is being prosecuted along with others on treasonable felony charges.

The government had accused the IPOB leader of flouting his bail conditions and filed an application asking the court to revoke his bail and direct security agencies to re-arrest him.

The prosecution had said that instead of using the opportunity of his bail to attend to his health needs, Kanu had gone ahead to inaugurate a security outfit, known as Biafra Security Service.

The prosecution said this constituted a threat to national security.

But when contacted, the Force Public Relations Officer, Jimoh Moshood, confirmed that the police had deployed more riot policemen in the South-East and South-South regions to avert a breach of security and maintain law and order.

But Moshood did not confirm if Kanu was under surveillance to prevent him from fleeing the country should the court rule in favour of the government, even though, sources in the police maintained that that was the situation.

Moshood said, “We have made additional deployments, particularly in Anambra State, because of the upcoming governorship election and also to other South-East and South-South states to ensure that IPOB did not actualise its threat of stopping the election.

“So also, any pronouncement from the court would be strictly enforced, irrespective of the persons involved. Nobody is above the law, so any court pronouncement would be enforced by the police.”

Moshood reiterated that the force was closely monitoring the situation in the South-East.

“We are strictly monitoring the situation for any eventuality from the court, since there is an ongoing judicial process,” the police spokesman explained.Moshood said the police would not leave anything to chance, while noting that any judicial order in respect of Kanu and other agitators would be enforced immediately.

He added, “We are not leaving anything to chance; we are to ensure there is law and order and any pronouncement from the court would be strictly enforced. We are watching the situation closely. We have made enough deployments and we are going to act appropriately.”

“We have yet to deploy helicopters because the situation is not ripe for it,” he added.

It maintained that Kanu had flagrantly violated all the bail conditions, adding that the essence of the bail, which was for Kanu to look after his health, had been defeated.

Attempts to get IPOB’s reaction to the development were not successful as of the time of filing this report.

Calls to the mobile telephone line of the group’s spokesman, Mr. Emma Powerful, did not connect and messages sent to him on WhatsApp, which is usually the best way to reach him, were not replied to.

But IPOB had, last weekend, vowed to resist any attempt by the Federal Government to re-arrest Kanu, without first obtaining a court order.

Powerful had said Kanu was prepared to be locked up in his quest to achieve Biafra.

In a statement released then, IPOB said, “IPOB wishes to notify the public about the illegal and undemocratic moves by the Federal Government, led by President Muhammadu Buhari, to re-arrest our leader, who committed no crime known to the laws of the Nigerian state.

“Before Buhari decides to make a move to arrest our leader, he must first go to court to obtain an order or else it will be resisted by millions of IPOB members.”

Reacting to the development, the Movement for the Actualisation of the Sovereign State of Biafra warned the Federal Government not to take the ‘non-violence approach’ of the pro-Biafra agitators for granted.

MASSOB National Director of Information, Samuel Edeson, who spoke to one of our correspondents in Enugu, said the secessionists were not bothered about the deployment of police and security agents to the South-East and South-South regions.

Edeson vowed that ‘Biafrans’ would use all resources at their disposal to resist any attempt to re-arrest Kanu.

He said, “The Inspector General of Police is just trying to please his masters, but we are not bothered.

“The deployment of security agents is just a ploy to clamp down on peaceful agitators who are only seeking self-determination, but it is a plus to the struggle because it shows that the government is jittery. We cannot be intimidated.

“There is a limit to human endurance. President Muhammadu Buhari and the Nigerian government should know that the Biafrans of today are different from the Biafrans of yesterday – a lot has changed and we cannot be taken for granted.

Posted by Lawrencia at 9:29 am
Email ThisBlogThis!Share to TwitterShare to FacebookShare to Pinterest
Labels: NationalNews