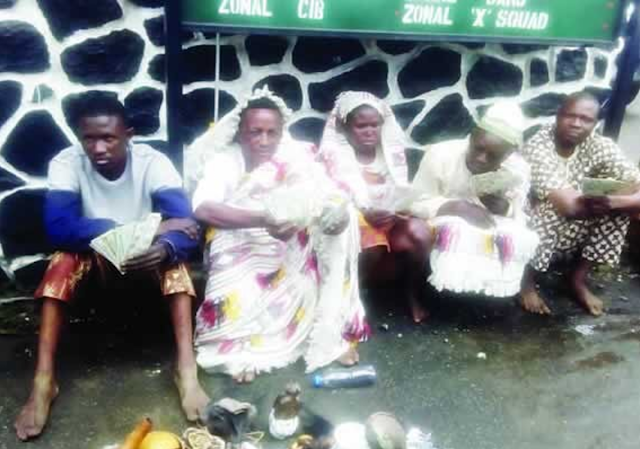 A businessman, Oladimeji Isiaka, has gone bankrupt after losing about N25m to suspected fraudsters who defrauded him under the pretext of curing his headache.

PUNCH Metro learnt that Isiaka, who lived in the Sango Ota area of Ogun State, sold his house and five cars to raise the money. However, after realising that he had been defrauded, he reportedly petitioned the Zone 2 Police Command, Onikan, Lagos State.

Investigations by operatives of the command led to the arrest of five members of the syndicate at their base in Ibadan, Oyo State. They are Alasela Ottun; Yetunde Mustapha, aka Iya Aje Funfun; Ibrahim Jimoh, aka Olobe Aye; Akeem Alabi and Oyegbile Lateef.

A police source said Isiaka was an in-law of Ottun and had sought his counsel sometime in October 2016 when he had the headache, which defied medications.


The source explained that 45-year-old Ottun, after defrauding the victim of a few millions of naira, passed him to Mustapha, who pretended to be a white witch with answers to all his problems.

Mustapha, 32, was said to have colluded with her boyfriend, Jimoh, who arranged a scheme through which millions of naira were collected from the victim.

The source said, “The man was into oil business. He called  Alasela (Ottun), for help. The in-law called Yetunde (Mustapha) to pray for him. From there, she passed information about his case to her boyfriend and they started demanding money from him to cure his headache, which they said was a spiritual attack.

“They eventually collected N25m from him. The man sold all his property, including five vehicles and a building. He also lost his business and became bankrupt. When they knew that the game was up, they threatened to kill him if he told anyone. The man wrote a petition, which the police followed up, and they were arrested.”

Ottun, an indigene of Iwo, Osun State, said he collected only N180,000 from Isiaka, adding that he called Mustapha to pray for him on the telephone without knowing that she had stored his number for ulterior motives.

He said, “The man is my wife’s brother. He knew I was into herbal medicine and he called me for solution to his headache. I did some medicine for him, which didn’t work, so I called Yetunde (Mustapha) to pray for him on the telephone.

“I never knew she had stored his number. I suspected something was wrong after I didn’t hear from my in-law for about three months. I also went to Yetunde’s house, but she had packed out. I never knew she had given the number to her boyfriend and they had been collecting money from him.”

Mustapaha said she pretended to be a white witch whenever she spoke with Isiaka, adding that she wore white costume at Ottun’s  shrine.
ADVERTISING

She said, “Alasela (Ottun) and I had been defrauding the man for some time. He was the one that asked me to store the man’s number on my phone.

“Soon, I met Jimoh and we fell in love. He took me to his shrine and said he was an herbalist. I told him about the man and I gave him his number. I don’t know how they took the money from him. But they gave me N50,000.”

Jimoh, an indigene of Ibadan, Oyo State, said he had an agreement with Mustapha to share the money realised from the victim, adding that he collected N8m from Isiaka.

He said, “When I met her, I told her that I was an herbalist and she told me about the deal. I asked her to give me the job, promising to share the money with her. She assured me that there would be no problem because the man was Alasela’s in-law.

“We asked him what he wanted and he said he needed money to start his own company. We promised to help him and he paid us N8m. The money was for him to be rich.”

The chief herbalist, Alabi, 39, said his duty whenever the gang brought a job was to “prosecute it.”

He said, “I am the chief herbalist. Whenever they bring a job, I prosecute it. It is whatever the people seek that we use to defraud them. Some talk about business boom, some about making money or moving to a higher level in life.  We make some fake concoctions and collect their money.”

Lateef explained that Isiaka had been cured of the headache, but he craved wealth, adding that it was his greed that the gang exploited.

The 27-year-old Ikirun, Osun State indigene, explained that the victim was shown a sack filled with fake dollars, adding that he was asked to bring N8m for the preparation of rituals that would enable him to spend the money.

He said, “I always stood outside as the Ifa errand boy. The man said we should help him to become rich and we showed him fake dollars in a sack. He first brought N5m and later added N3m. He was not allowed to touch the money. Whoever is looking for cheap things will run into heavy losses. He thought we cured him of his headache, not knowing it was God. We just took advantage of that to defraud him.”

The Zone 2 Police Public Relations Officer, SP Dolapo Badmos, said the suspects would be arraigned at the end of investigations.

“We recovered charms, fake currencies and fetish objects from their shrines. The Assistant Inspector-General of Police, Adamu Ibrahim, has ordered that they should be arraigned in court,” she said.

Posted by Lawrencia at 10:21 am
Email ThisBlogThis!Share to TwitterShare to FacebookShare to Pinterest
Labels: Crime