Calamity : After 8 Miscarriages In 21 Years Of Marriage, Woman Loses Husband, And Only Child To Lightning 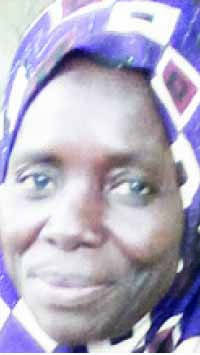 The world seemed to have come to an abrupt end for a 45-year-old woman, Esther Adigizi, when she lost her husband and only child to thunderstorm in Nasarawa State recently.

On the night of Monday July 24, 2017, she went to bed late, with full intent to wake up early and prepare her husband’s favourite meal for breakfast before they would set out to their farm.

About 5.00am, she was awakened by intermittent thunderstorm which followed a downpour. As she made her way to the rest room to ease herself, she heard a shrill cry from the room where her husband and their two-year old son, Jacob slept in their home in Azubi, which is on the outskirts of Lafia, the state capital. On her return, she dashed straight to the room to be confronted with a shocker.

Her beloved husband, Clement Adigizi, and the only child whom she bore 19 years after having eight miscarriages in a 21-year-old marriage, lay stone dead on the bed. They had been struck by lightning, leaving her alone in grief and pain.

“I met my husband 21 years ago in 1996, at a market in Nasarawa Eggon, where he hailed from, when I took some yams there for sale; he bought from me and our relationship started from there, which later blossomed to marriage. I had eight miscarriages before 2014 when I got pregnant and was delivered of a baby boy on May 2, 2015. It was a great celebration for us to have a child after 19 years of waiting. Then the unexpected happened in just a flash,” Esther lamented in an encounter with Sunday Sun.

Ironically, her husband was the only male child of his parents who died 11 years before their marriage. Her five siblings, four males and a female, had all died one after another, just as her mother and her father also died barely three years ago; and to make her situation worse, she lost her husband and her only child.

The sad incident, she said, crashed her world like a pack of cards and dashed her hopes, leaving her in sorrow and pain. Daily, she takes a glance at the photographs of her husband and son which hung on the walls of their home, drenched in tears. Momentarily, she goes blank and when she regains consciousness, she tells you how her heart bleeds in her new world of loneliness.

“I’m now a lonely woman who once savoured the care and warmth of a lovely husband and son. We were preparing to enroll him in a nursery school this September. Now they are both gone and I’m living in gloom, waiting for the day death will come for me,” she muttered as she wept inconsolably.

In pains, she narrated how her dream for her two-year-old son evaporated with the speed of lightning that claimed him and his father. “My husband was not educated because his parents were peasant farmers and did not value education; for me, I schooled up to secondary level at Government Secondary School, Eggon, where I graduated. We loved ourselves as farmers, and worked hard to secure a plot at Azubi where we built a three bedroom apartment. We planned big for our only son, and our dream was that since we were not opportune to be well educated, we would strive to give our son the best.”

She added, “It is unfortunate that he and his father are no more; I am finished. My husband used to be my pride; whenever he came back home from the farm, he was always happy that we were making progress. His death along with my son is agonizing for me; and I ask God what I had done to deserve this heavy punishment. I ask myself what curse had befallen me and my family; I believe these deaths must have a cause; my husband and I were good Christians and God couldn’t have punished me for not worshipping Him. Though my husband and son have gone six feet under the earth, their memory remains evergreen till I join them to part no more.”

Posted by Lawrencia at 11:38 am
Email ThisBlogThis!Share to TwitterShare to FacebookShare to Pinterest
Labels: Gists