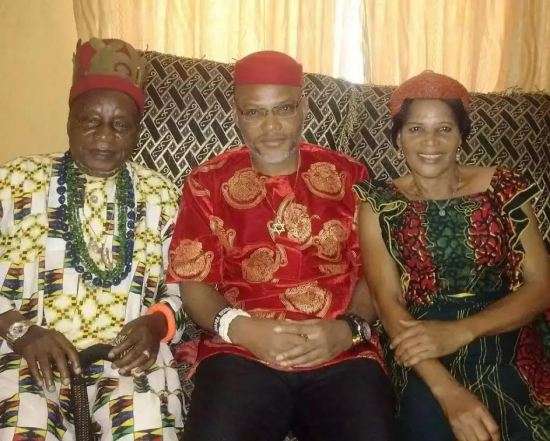 His Royal Highness, Isaac Okwu Kanu, is the traditional ruler of Afara Ukwu Ibeku in Umuahia North Local Government area of Abia State and father of the leader of Indigenous People of Biafra (IPOB), Nnamdi Kanu. In this interview with OKEY SAMPSON in his palace, the royal father spoke strongly against the recent move by the Federal Government to get his son re-arrested, warning that it  would spell doom for the country. He also sent an SOS to the United Nations, alleging that the Federal Government planned to kill his son.

You may have heard about the move by the Federal Government to get your son, Nnamdi Kanu re-arrested, what’s your reaction?

Why will they want to re-arrest him? Did he kill anybody? Did he flout the constitution? Some people are saying that my son, flouted the bail condition given him by a Federal High Court in Abuja, but the question remains, what type of bail condition was that? Is it possible that a person of my son’s standing in the society could stay without meeting up to 10 persons in a day or week? So, the said bail condition was against his fundamental human rights. But that not withstanding, I know what we are passing through in my palace; trying to stop people from coming here, but there is a limit to which we can do that. Initially, the major gate to my palace had always  been open, but since he came back, that gate has always been shut and we did that to stop people from gaining access to the compound. So, I don’t know what they are talking about.


The accusation against your son is that he has been visiting cities in the South East to address his supporters which is contrary to his bail condition. What do you have to say on this?

The court in the first place never restrained him from moving about. So, in the course of going to see one or two of his friends and those people would organise reception for him, I don’t think there is anything wrong with that to warrant his being crucified. The question I have been asking since I heard about this planned re-arrest is whether Nnamdi is running away from the country? There is no way he would do that. Any day they want him to appear in court, he will quietly do that.

I read the other day that the Attorney General of the Federation (AGF) and Minister of Justice, Abubakar Malami said the Federal Government did not arrest sponsors of quit notice to Igbo living in the northern part of the country because of the security implications. From what he said, it was not that the Arewa youths did not commit any offence, but the issue is that the Federal Government is afraid of what will come out of such arrests and allowed them to move freely. On the other hand, they are making move to get Nnmadi Kanu, who had done nothing re-arrested because they believe nothing would happen if they do that, but they may be making the greatest mistake. It is this treating people from a certain part of the country as being superior to others that is making the agitation for Biafra to gain momentum on a daily basis.

Are you entertaining fears that anything untoward might happen to your son if he is re-arrested?

Yes, of course, I’m a human being. When they talk of re-arresting him, it means they want to kill him, but God will not allow them because my son has done nothing wrong. I am using this opportunity to call on the United Nations to call the Nigerian government to order because they are planning to kill my son. My son did not do anything; government should go after those who have committed offence against Nigeria.

Another thing the Federal Government is having against your son is that he formed a security outfit known as Biafra Security Service (BSS). What’s your reaction?

There is nothing substantial about that. Even in the community, there is vigilante group and what Nnamdi has is not different from that. Even in the community’s vigilante group, the members at times carry arms provided by the people. In my son’s case, the few boys that guard him whom they call BSS do not even carry sticks not to talk of arms. So, if he has about two or three night guards to prevent people from assassinating him, I don’t think he should be crucified for that.

With the move by Federal Government to re-arrest your son, would you advise him to renounce the agitation?

There is no way I will advise him to forget the agitation for Biafra ,because I told him from day one that I fully support him, because what he is doing is for the good of his people. So, advising him to drop the agitation now because of the fear for his life would not be ideal. It is bad for one to be marked out for elimination because he said the truth.

Some people are of the opinion that re-arresting Nnamdi Kanu will cause more problem for the country, do you believe this?

Yes, re-arresting my son will definitely cause more problems for the country. Why would they re-arrest my son; to kill him? God and our people will not allow that to happen. They should realise that Nnamdi has a boy he has not set his eyes on since he was born and it was out of respect for the laws of the land that made him not to go to London to see that boy.

What’s your advice to Federal Government in this regard?

My advice to the Federal Government is that since we have freedom of speech in Nigeria, it will be counter-productive to incarcerate or kill him; he did nothing wrong.If he had offended the law, I will be at the forefront calling for his arrest, but since he has done nothing wrong, they should allow him to be.

He said  it was very wrong of the old man or anyone to accuse the police or the Federal Government of a plan to kill his son without substantiating it with facts.

“If there was any deployment of police in the South East, it is because of the upcoming Anambra State gubernatorial election in order to maintain law and order.

Posted by Lawrencia at 9:32 am
Email ThisBlogThis!Share to TwitterShare to FacebookShare to Pinterest
Labels: NationalNews