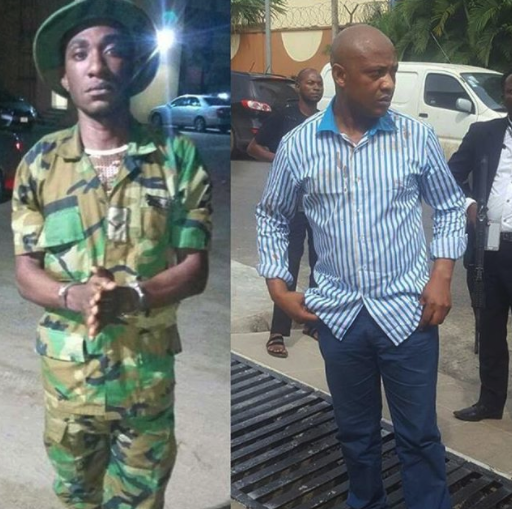 Aduba Victor Nonso, a 28-year-old ex-soldier who joined the Nigeria Army on August 15, 2009, has disclosed how he spent over N3m which billionaire kidnapper, Evans gave him for participating in several alleged crimes and went broke again,

In an interview with Vanguard, Aduba said: “My income was low and it wasn’t enough to fend for my family. One of my friends who is also from my home town known as Ikenna, led me into crime. He brought one of his friends, known as Skudo.

They told me that Skudo was an importer. I used to escort him to his village whenever he was travelling and he paid me handsomely. Sometime in January 2015, he called me and asked that I should meet him at Ago-Palace Way.

He told me that there was a man owing him money and he needed me to come with my army uniform so that I could intimidate the man with my uniform. When I got there I saw Skudo, Ikenna, Evans and another person inside the car.


We drove towards Ajao Estate. Ikenna and Skudo brought out two rifles and when I saw them, I was shocked. I asked what they were doing, but Evans gave me a hot slap.

He told me that I was now part of their group. Then they brought out a cup filled with gin and a bullet in it and they asked me to swear never to disclose what I saw to anyone.

After that, Evans got a call from someone about someone he had been monitoring. Evans drove fast and he caught up with the person and kidnapped him. He then asked us to all alight from the vehicle and gave me N5000, promising to call me.

One month later, Skudo called and gave N200,000 as my share, saying the balance would be paid later. One month after that Skudo called again and said Evans said I should come for my balance.

When I got to Ago, we drove into Festac Town where we kidnapped a man. One month after, Skudo called and gave me N1.8m as my share. I took part in two other kidnappings and was given N800,000 each.

Evans didn’t pay me for the last operation and he stopped calling me for jobs. I spent most of the money on women and hotels. I also got married with part of the money.”

Posted by Lawrencia at 10:17 pm
Email ThisBlogThis!Share to TwitterShare to FacebookShare to Pinterest
Labels: Crime