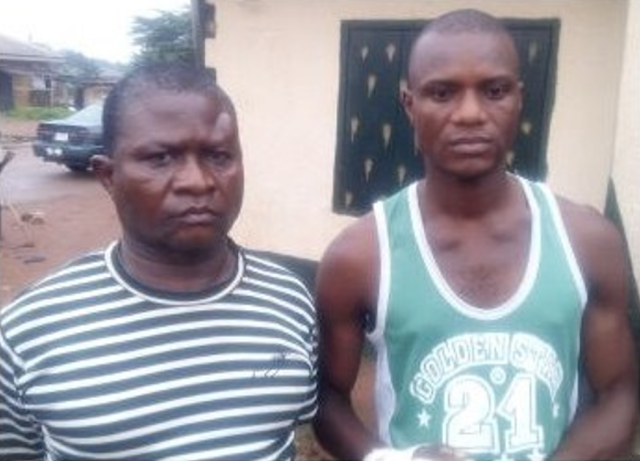 49 year old Clement Silver from Tiv in Benue State but residing at Odozi Street, Agbor, has been arrested and paraded for allegedly arranging his own kidnap to fraudulently obtain money from his wife.

He was apprehended by members of Agbor Gha-Ihun security outfit at his hideout beside Camelite Paint, Agbor, Delta state, alongside his accomplice, Mr. Sunday Kibechukwu, 33, who acted as the kidnapper.

The suspect while confessing to the crime said his intention was to force his wife to pay his demand, adding that he needed the money to boost his lottery/betting business (Bet Naija).

He said he was retrenched as a security officer with UBA bank, Agbor, last year, and since then, he has been managing with the lottery/betting business while his wife deals in poultry business.

According to him “I connived with Sunday to frame my kidnap in order to collect money from my wife because I needed it to boost my business with the intention of paying her back after my business improves.

I chose not to ask my wife to loan me the money because I am very convinced that she will not give me the money and the only way for me to achieve this was to frame my kidnap.”

On his part, Sunday who hails from Aniocha North LGA of Delta State, noted that Silver lured him into involving in the crime with a promise to return the money and also give him N10, 000 to treat the injury he sustained while working at a bakery in Boji-Boji Owa.

It was gathered that the suspects after the kidnap had contacted Silver’s wife and demanded a ransom of N1million and directed that the money should be dropped along Benin/Asaba Expressway at Umunede.

In the course of negotiation, she pleaded to pay N300,0000 which they refused. But as fate would have it, Silver was sighted at his hideout and was reported to Agbor Gha-Ihun who quickly moved to arrest the culprits.

Posted by Lawrencia at 1:54 pm
Email ThisBlogThis!Share to TwitterShare to FacebookShare to Pinterest
Labels: Crime