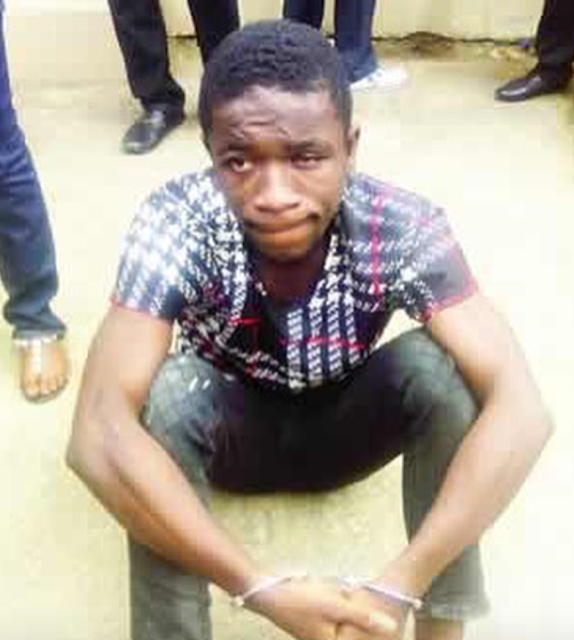 A suspected armed robber, Michael David, has been arrested by operatives of the Special Anti-Robbery Squad, Lagos State, after he robbed a lady, identified simply as Kate, of her phone.

PUNCH Metro gathered that 22-year-old David and two other members of his gang, while armed with a locally-made double-barrelled pistol, attacked Kate and her boyfriend, one Desmond, on Close 26, Satellite Town, Ijegun, around 10pm.

They were said to have taken Kate’s mobile phone and threatened to shoot the couple dead if they resisted.

The gang had allegedly mounted a waiting motorcycle and were about speeding off when Desmond summoned courage and attacked the men.

He was said to have succeeded in pulling down David, as his girlfriend called for help.

Attempts by the suspect to shoot the victim failed, as the gun reportedly jammed.

The Imo State indigene was reportedly mobbed by residents, who handed him over to the police.

The Commissioner of Police in Lagos, Edgal Imohimi, paraded David among seven other suspected robbers at the Police Officers’Mess, Ikeja, on Wednesday.

Imohimi said Desmond and Kate had closed from work and were heading home on August 13, 2017, when they were attacked by the robbers.

He said, “On August 13, 2017, at about 10pm, one Demond and Kate, both residents of Satellite Town, Ijegun, Lagos, were on their way home when they were attacked  at Close 26, Satellite Town, by three armed robbers with one locally-made double-barrelled pistol. The suspects ordered them to surrender their phones or get shot. They dispossessed them of a mobile phone, valued at N39,000, and jumped on their standby motorcycle.

“But the man summoned courage and dragged one of them, Michael David, down from the motorcycle and with the help of passersby, the suspect was arrested and his gun taken away from him. The two other robbers escaped with the stolen property.”

The suspect, who claimed to be a tiler, said he was not the owner of the gun, adding that it belonged to his friend, one Ahmed.

David said his gang had only approached the girl to collect her phone, adding that he was not an armed robber.

He said, “We were coming from a friend’s party around the Waterside area on that day when we sighted the girl passing with her boyfriend. We went to meet her to collect her phone and she suddenly raised the alarm. My friends ran away, but I was caught. I was not caught with the gun. Two to three hours after the incident, some OPC members brought the gun and said it belonged to me. I am not an armed robber and we didn’t attack the girl; we only collected her phone.”

When, however, the Investigating Police Officer challenged him on his denial of the gun, he owned up.

The policeman explained that the suspect had attempted to shoot Desmond and his girlfriend dead when the gun jammed.

“He made an attempt to shoot at them, but the gun disappointed him. He was the one holding the gun,” he said.

In a related development, the police said five other suspects were arrested with five guns in the Egbeda area of Lagos State during another robbery on Wednesday, September 6, 2017.

PUNCH Metro learnt that police operatives received a tip-off on the activities of the men and swung into action, leading to their arrests.

The suspects, however, denied being robbers, saying they were local vigilance men and they used the guns for their work.

Jimoh said he was a filling station security guard and was wrongly accused.

He said, “On that morning at about 2am, Ojo, who is also a community guard, came to the filling station where I work in the Ikotun area.  He said he wanted to buy fuel and I told him we had closed and don’t run 24 hours services.

“When I came out to further talk to him, some men just came out of the dark and held me. They said they were policemen and that I was under arrest.  They requested my gun. I told them the gun was given to me by my boss.

“They said I belonged to a robbery gang and I told them it wasn’t true. I requested that I should be allowed to get my identity card from my room and also call the filling station manager, but they took me away. Since then, I have not been allowed to reach anyone.  I know nothing about what they are saying.”

Another suspect, 61-year-old Adekunle, said he had been a guard in the Egbeda area for the past four years, adding that his gun was given to him by a former landlord association chairman, who was late.

He said, “I was only doing my job as a security guard before I was arrested. I am too old to be a robber.  What I did not do in my youth; is it now that I am old that I will engage in it?”

Posted by Lawrencia at 12:04 pm
Email ThisBlogThis!Share to TwitterShare to FacebookShare to Pinterest
Labels: Crime