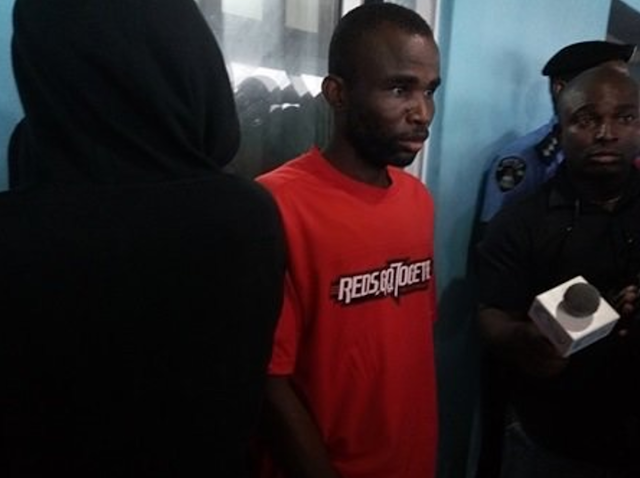 The police in Bayelsa State have apprehended a 47-year-old man, Moses Otimba, for killing a five-day-old baby boy he fathered with the younger sister of his pregnant wife.

The suspect, was said to have impregnated the girl, Joy, and allegedly killed the child and buried it in a shallow grave near a river.

Otimba, an indigene of Ogbogoro community in Yenagoa Local Government Area of the state, was said to have carried out the act in connivance with Joy in order to hide the paternity of the baby.

Joy, 18, allegedly refused to disclose the identity of the father of her unborn baby throughout the nine months she was pregnant. She lived with her sister and Otimba throughout the period.

The two suspects were on Thursday paraded by the Commissioner of Police, Bayelsa State Command, Mr. Asuquo Amba, at the command’s headquarters in Yenagoa, the state capital.

Amba said policemen from the Yenagoa Police Division, arrested the two suspects on August 15, 2017, noting that they had confessed to the murder.

The CP said, “Mr. Moses Otimba, male, 47, impregnated one Joy Matthew, 18, a younger sister to his wife, Glory. The pregnant Joy was delivered of the baby by a traditional birth attendant at Amarata, Yenagoa on May 8, 2017.

“On May 13, 2017, Moses, Joy and the baby left the birth attendant and went across  the Swali Bridge where Moses took the baby from his  mother, went down the shore, suffocated the baby and buried the body in a shallow grave.”

Amba said Joy, who alleged that she was being tormented by “some spirits”, confessed to the incident to her mother three months after the act.

He said Joy’s mother alerted the police, which swung into action and arrested the suspects.

The police commissioner said, “The police visited the scene of the incident. By the time they got to the scene, the current of the river had washed away the child’s body.

‘’The suspect, Moses Otimba, has confessed to the crime and Joy has also confessed her alleged involvement in the murder of the baby. Investigation is ongoing.’’

When asked if what the police said was true, the prime suspect, Otimba, spoke in affirmation, saying that he killed the baby because he was scared and afraid to break the news to his wife (Glory) and his mother-in-law.

He admitted that he killed the baby with the consent of Joy, saying that he told Joy of his predicament concerning the paternity and that Joy “gladly gave him the boy” to kill.

Otimba said, “I killed the baby boy because I was afraid. I did not really know how to face my wife and my mother-in-law. I am really sorry.

“I took the baby to the bush in my community and closed his nose until he died. When I was carrying out the act, I was weeping and crying but I had no choice.

‘’When I got to the site, he was five days old then, I closed his nose and within some seconds, he stopped breathing. After that, I started regretting.

“The mother of the baby agreed that we should kill him. I told Joy that I did not know how to tell my wife about the development.

“On that day, she was carrying the baby. She gladly gave me the baby to do as I wished. My wife was not aware of all of this.  But somehow, I did not know what happened. I learnt the baby’s mother told her mother who alerted the police and we were arrested.”

Posted by Unknown at 11:25 am
Email ThisBlogThis!Share to TwitterShare to FacebookShare to Pinterest
Labels: Crime