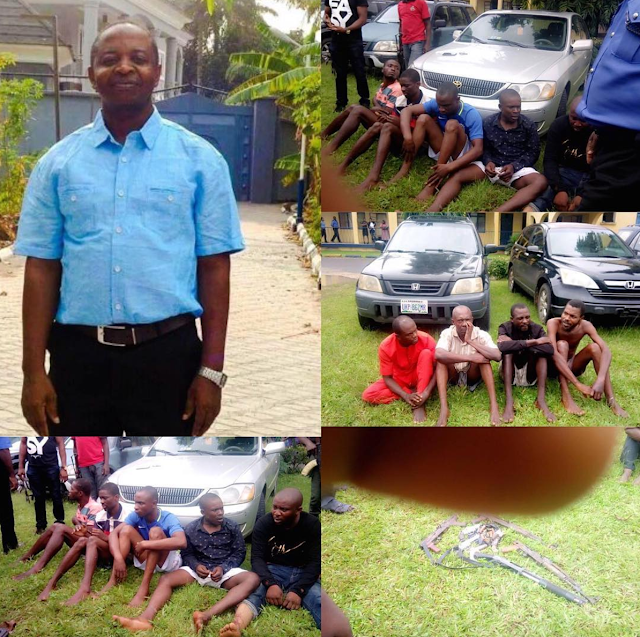 The suspected killers of Rev. Fr. Cyriacus Onunkwo of the Orlu Catholic Diocese, Imo State, were on Thursday paraded by the state Commissioner of Police, Chris Ezike.

The prime suspect was identified as a 32-year-old dismissed ex-Corporal Jude Madu, who allegedly masterminded the abduction of the cleric. The late reverend fathered had returned home to organise the burial of his father, Celestine Onunkwo.

According to the CP, the operation which led to the arrest of the kidnappers cut across Imo, Anambra and Rivers states.

The police boss disclosed that police teams were able to round up the suspects through tracking of the telephone of the slain priest, while his wristwatch was recovered from one of the six suspects.

Ezike said, “We used forensic technology and backed it up with hard work, commitment, passion and hunger for success.

“The ex-policeman was arrested with the late reverend father’s mobile phone.

“The policeman, who has been dismissed, is a member of an armed robbery/kidnapping syndicate and took part in the operation. He was arrested on September 5 in Owerri in possession of the deceased’s phone. He has confessed to the crime.

“Rev. Fr. Onunkwo was abducted, tied up, while his mouth was covered with  a reel of tapes and dumped in the booth of the car used by the hoodlums.

“He apparently gasped for air and could not make it. This interim finding has yet to be supported with scientific examination which further investigation intends to explore.”

Ezike said one of the suspects, Okafor, fled to Port Harcourt in Rivers State after the operation.

“Okafor was arrested on September 6 at Hotel Presidential, Port Harcourt, where he fled after the incident. He has confessed as well,” Ezike said.

The CP disclosed that another suspect, Onyema, drove the Toyota Avalon ash colour with number plate, ETU 368 AA, used for the operation.

Onyema said they covered the mouth of the priest to stop him from shouting, which led to his death.

The suspect said, “We didn’t know that he was a Catholic priest.

“The ex-policeman coordinated the operation. I stopped the car when our victim revealed his identity but he ordered me to move. I had to obey him because he was armed.”