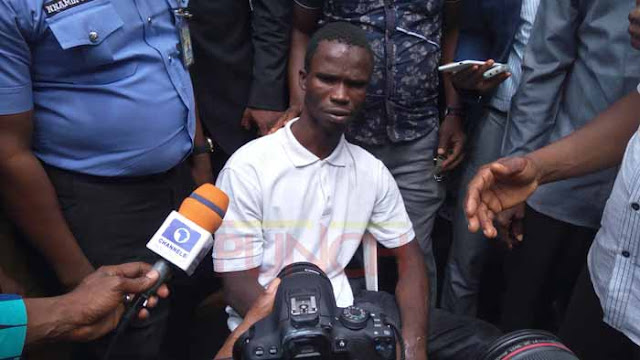 Ifeanyi Dike, the suspected ritual killer who was rearrested last week, said on Monday that the search for food to satisfy his hunger made it possible for security agents to re-arrest him when he came out of his hideout.

Dike, who raped and killed an eight-year-old girl, Victory Nmezuwuba, in Jos, Plateau State, had escaped from police custody before he was recaptured last week.

The suspect was first arrested in Eliozu, Port Harcourt, when he attempted to dispose off the mutilated body of his victim after removing her tongue, two eyes, two fingers and one breast.

The state Commissioner of Police, Mr. Ahmed Zaki, while parading Dike, said the media helped in the re-arrest of the suspect through information made available to the public.

“I wish to assure you that justice will be done, while the suspect and other culpable persons will face the full weight of the law,” he added.

The father of the eight-year-old victim, Dr Ernest Nmezuwuba, pleaded with the police to carry out a thorough investigation into the circumstance that led to the gruesome murder of his daughter, insisting that Dike was not the only person involved in the killing of his child.

He said, “I want the police to do a thorough investigation because in Ifeanyi’s statement, he said he was sent by a person and the person is in police custody. The person is one Ugochukwu. The evidence is there.

“What I need is justice. All those involved in this crime should be arrested.”

Dike said on Monday that he was sorry for his action, adding that he hid for several days in his hideout without food and had to come out when he could no longer bear the hunger.

He said, “When I got to Jos, I was not able to go out to get food because of my injuries. I stayed for several days without food. When I eventually decided to go in search of food, I was caught.”

The suspect said the he was able to escape when the Investigating Police Officer, Johnbosco Okere, was opening the police cell.

The suspect said, “At the State CID, It was late when I finished writing my statement. As the IPO opened the cell for me to go inside, I just fled. The IPO was taken unawares.”

Posted by Lawrencia at 11:37 am
Email ThisBlogThis!Share to TwitterShare to FacebookShare to Pinterest
Labels: Crime