Why I Want To Enlarge My Butt – Actress Cossy Ojiakor 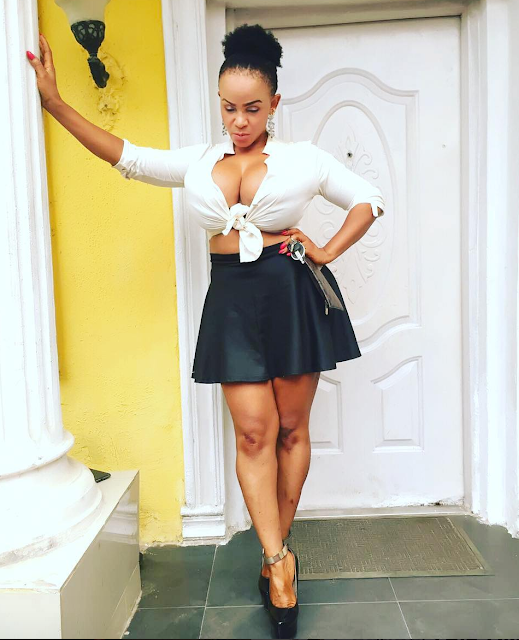 Nollywood actress Cossy Ojiakor, has one of the biggest boobs in the Nigerian entertainment industry, is a fact that has never been contested. Even though there have been a couple of new bloods who have displaced Cossy as the ultimate ‘boob queen’ in the industry, the part-time singer is still one to be reckoned with in that department.

However, it seems Cossy is no longer satisfied, she also wants bigger butt. She uploaded a picture of her butt on Instagram recently and asked for her followers’ opinion as to whether she should go under the knife for a bigger backside.

In an exclusive chat with Sunday Scoop, the actress explained why she is lusting for a larger bum. “I am so happy that Nigerians are looking sexy. As a matter of fact I want to go and enlarge my butt. I think it is very small so I want a bigger one. I may have the surgery in December, January or any time I choose. I am seriously thinking about it. My message to everyone out there is, if you have any problem with your body, go ahead and do something about it. If it’s big boobs, or butt; go ahead and do that. Otherwise, you will just be there watching other people make things happen. Back in the days, white people had flat butt, but now they are so sexy,” she said.


Revisiting the issue of a Catholic priest she once threatened to expose for his immoral acts, she said, “I was given money, so I won’t say anything about that. I spoke about it then because it actually happened. All I just wanted to do was to let people know that because someone is out there preaching does not mean he is holier than everybody else. It wasn’t a personal fight with the priest. I ate his money, so I can never mention his name. I have nothing to gain by revealing his name, but be rest assured that the incident actually happened.”

Speaking on her relationship status, Cossy said, “I was engaged, but right now, I just don’t care.”

Posted by Lawrencia at 11:02 am
Email ThisBlogThis!Share to TwitterShare to FacebookShare to Pinterest
Labels: Gists