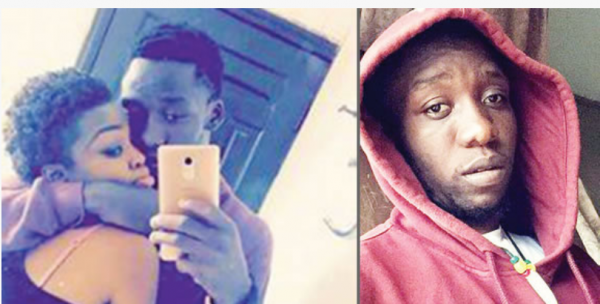 Although the immediate cause of the incident had yet to be ascertained, comments on the Facebook account of the deceased suggested that they had a history of violence.

The post was accompanied by a selfie of the duo cuddling in the doorway, with an inscription, ‘she remains my queen.’

“Baby, on your birthday, I pray that you get whatever your heart desires. May this special day of yours bring with it God’s blessings and love into your life…. I love you,” he wrote on the Facebook page.

On Saturday, a day after the post, Akintoye took to his timeline again and wrote, “Sometimes, a man needs to die to leave (sic) again.”

On Monday, he was allegedly stabbed to death by Osazuwa.

A friend of Akintoye, Onyenma Chibundu, stated that he had been warned several times to stay away from Osazuwa to no avail.

“Young Tommy, you were told several times to leave this b***h you took as your GF (girlfriend), you disagreed. Now she has taken your life  with her own hands. RIP bro; (I) will forever miss you,” Chibundu wrote on Facebook.
Akintoye and Osazuwa

Another friend of the deceased, identified simply as Jnr Slimzy, also corroborated Chibundu’s post, saying he had tried in vain to separate the lovers.

“I also warned him. Why as I travel this thing con happen? God knows best brother,” he stated.

In another post, Jnr Slimzy wrote, “Rest in perfect peace Lifeoftomson Seun. Never thought it could be you. I never wanted to hear this kind of news. Why would you leave me like this? It hurts so much. After we planned our future together, how could you just leave me like this? Do you know how much it hurts? Your memories can never be erased. My other half just disappeared…. RIP brother, blood, best friend, till we meet again.”

In his post, another friend, Jeda Harry, said the death was avoidable if Akintoye had yielded to his warning to quit the relationship with Osazuwa.

Grieved Sofia Blessing  said it was unfortunate that such fate befell Akintoye “after you told her you loved her on her BD (birthday), she stabbed you. Such wickedness!”

However, efforts to get further details about what transpired between the lovers from their friends proved abortive as none of them had yet to reply to text messages sent by our correspondent as of press time.

Meanwhile, a police source said there was a disagreement between them around 8am and Akintoye assaulted the suspect.

“The suspect retaliated and stabbed him with a pair of scissors in the chest. He was rushed to a hospital, but he bled to death,” the source added.

A commentator, Samantha Florence, said she was disturbed at incidence of violence among teenagers.

She wrote, “Teenage girls of these days are something else. Is it that their parents didn’t bring them up well or what? How can a girl of 17 think of stabbing someone?”

One Yinka Julius added, “Face of a murderer. Who will know this girl is capable of killing somebody… I think this generation is cursed. Na so one go drink sniper two days ago; another one killed her baby daddy in Gbagada just two weeks ago. Maybe God should just wipe this generation out.”

The Lagos State Police Public Relations Officer, ASP Olarinde Famous-Cole, who confirmed the incident, said the suspect had been arrested.

He, however, did not give further details.

He said, “Suspect arrested, while the case will be transferred to the homicide section of the State Criminal Investigation and Intelligence Department, Yaba.”

Posted by Unknown at 11:28 pm
Email ThisBlogThis!Share to TwitterShare to FacebookShare to Pinterest
Labels: Crime