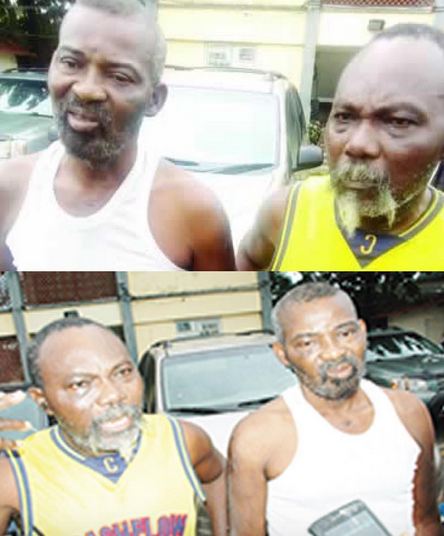 A 57-year-old herbalist, Tunde Ajibolorunsoro, aka professor, has been held by the police for allegedly abducting a five-year-old girl in the Meiran area of Lagos State. He was said to have sold the victim, Aishat Muyideen, to his neighbour, Tajudeen Makanjuola, who is also an herbalist, for N60,000.

PUNCH Metro gathered that Aishat went missing on Wednesday, September 25, 2017, and his father, Yekini Muyideen, reported the case to the police at the Meiran division. It was learnt that police operatives acted on a tip-off and picked up professor.

The state Commissioner of Police, Edgar Imohimi, stated that professor led police operatives to arrest Makanjuola. He said the duo had engaged in a number of child kidnapping before luck ran out on them.

He said, “The suspects specialise in kidnapping and selling children. After the father of the girl reported the case, investigation commenced. Investigation revealed that Ajibolorunsoro, aka professor, sold Aishat to one Makanjuola, aka Oluwo.”

However, the suspects, who spoke with our correspondent on Monday at the police headquarters in Ikeja, refuted the allegation.

Professor said he was tortured by the police to confess to the crime.

The police command, however, dismissed his claim.

He said, “I am a native doctor. On Wednesday, I was sitting outside my house in the evening when I saw some people, who said they were searching for a missing child. Around 11pm when I retired to bed, some people shone torches on my house. I came out and asked them what happened. They said they were looking for a child.

“I advised them to report at the Meiran Police Station and they said they had done so. A few minutes after, I saw the torchlight again and came out.”

He said a crowd thronged his house the following morning and accused him of abducting the child. He said his apartment and compound were ransacked but the girl was not found.

“The police later arrested me. They tortured me to the extent that I didn’t know when I confessed that I stole the child and sold her to Oluwo.”

Oluwo, 65, who said he had no hand in the disappearance of the girl, stated that he was arrested after professor “was forced to confess.”

He said, “This man (professor) had said he was tortured to confess and that was why he mentioned me. If I know anything about this matter, I should die mysteriously. I am an herbalist in Meiran. I only know professor as a neighbour.”

Meanwhile, one Olamilekan Alatise, has been arrested in connection with the murder of a four-year-old girl, Faridat Sulyman, on Ogbe Close, Iwaya, Lagos State.

PUNCH Metro had reported that Sulyman was found in a pool of blood in a shrine at the back of her parents’ rented apartment on July 24, 2017, around 8pm.

Alatise was said to have been the custodian of the shrine since his father, who owned it, died.

The CP said efforts were ongoing to arrest other suspects complicit in the murder of the girl.

“After an extensive investigation into the incident, I am pleased to announce to you that one Olamilekan Alatise, the mastermind of the heinous crime, who resides in Ikorodu, has been arrested.

“He confessed to the crime and also mentioned his sister and one other in connection with the incident,” he said.

But 35-year-old Alatise rebuffed the confession claim, saying he only used dogs and pigs for sacrifice at the shrine.

“I did not know anything about the girl’s death. The only person that also performs sacrifice at the shrine is a man called Kazeem,” he added.

Posted by Unknown at 7:22 am
Email ThisBlogThis!Share to TwitterShare to FacebookShare to Pinterest
Labels: Crime