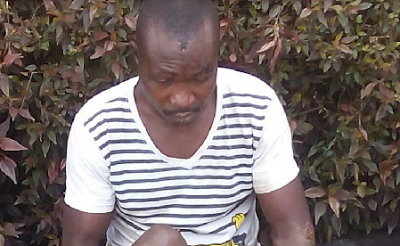 A robbery suspect, Chukwuma Okoro, has narrated how his wife pushed him into robbery as a means of livelihood. Okoro said he particularly joined the robbery gang to enable him pay N300, 000 as bride price of his wife.

The suspect, who said he is a vegetable seller, accused his wife of pushing him into robbery. He said “I am a vegetable seller here in Akure. It was my wife that pushed me into armed robbery. I have never stolen in my life. This is the first time.

“My woman ran away from my house since three weeks ago. But she has been begging me to come back. So, I started looking for money to pay her dowry before she comes back.”

“There was no way I could get more than N300,000 to pay her dowry as demanded by her family. That was why I tried to rob and it was the first time I would be doing it,” he said.

Okoro was said to have been arrested by passers-by while attempting to rob a girl of a sum of N500,000 she was taking to the bank.

The armed robbery suspect and three others were paraded by the Ondo State Police Command at its headquarters in Akure, the state capital.

Other suspects paraded with Okoro were Ezenwa Raphael, Chukwudi Oruma and Thomas Onofuapo.

Femi Joseph, the State Police Public Relations Officer, said Okoro and other suspects were among the armed robbers who had been terrorizing the state in the recent time.

Joseph said: “Okoro attacked a sales girl who was going to the bank to deposit a sum N500,000. As he was struggling to collect the money from her, the girl raised the alarm that attracted passers-by who arrested him.”

The police spokesman said a pistol and five live carriages were found on Okoro when he was arested.

Saying the suspect would soon be charged to court, Joseph added that the command would continue to make efforts to stamp out criminal activities in the state.

Posted by Lawrencia at 9:05 am
Email ThisBlogThis!Share to TwitterShare to FacebookShare to Pinterest
Labels: Crime