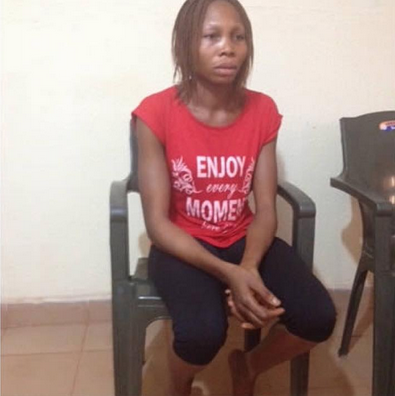 A 22-year-old lady, identified as Rebecca Tina, is being held by the police in Enugu for killing her uncle, Friday Mathew.

Mathew was murdered at the Independence Layout area of Enugu on Thursday.

Tina, an indigene of Ikot Udobang Ukanafon, Akwa Ibom State, was arrested by the operatives of New Haven Police Station, Enugu, while attempting to escape, after committing the crime.

But the 22-year-old, in her confessional statement, disclosed that she killed her uncle while trying to prevent him from raping her.

Tina told the police that her uncle had attempted to sleep with her for a very long time.

She claimed that she had been resisting Mathew’s amorous advances until the matter took a tragic turn around 8.30pm on October 26.

Tina added that she smashed a stone on her uncle’s head because the latter did not let her go.

“It was not my intention to kill him. I never intended to do so. He had been disturbing me for sex. I killed my uncle when he tried to rape me,” Tina said.

He said, “When the child of the deceased came back and met the lifeless body of his father, he was allegedly warned by the suspect not to shout in order not to attract attention.

“She (Tina) promised the young boy that she would take care of him. She then locked up the house and went away with the boy. She dropped him at one of their aunts’ place and disappeared.

“The suspect is regretting her action and begging for forgiveness as she claimed that she never intended to kill her uncle.”

Posted by Lawrencia at 10:17 am
Email ThisBlogThis!Share to TwitterShare to FacebookShare to Pinterest
Labels: Crime