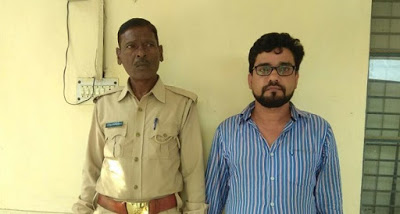 A school staff in India, identified as Ashok Mishra, has been accused of raping an 11-year-old class-six Nigerian pupil.

The 35-year-old school official was arrested by the Police in Greater Noida where the incident occurred on Tuesday. According to DNA India, the accused has been sent to judicial custody for 14 days.

The school principal told Hindustan Times on Thursday, Oct. 26, that the accused, Mishra, had been working as an administrative assistant for the school for five years. Mishra’s job was to ‘screen’ visitors of the principal. He also used to sell school diaries, resource books and uniforms to students. He had access to the entire building, including the teachers’ staff room.

The issue came to public attention last week Monday when the victim complained to his mother that he was being sodomised by a school staff for the last four years. The parents alleged the sexual assault used to take place in a toilet on the second floor of the school building.

“On Monday, two police officers had come to our school to inquire about Mishra. Since he was entrusted with installing GPS in school buses, I thought the police wanted to talk to him about that but it was at 9.45pm that I got to know that he was in police custody. He was a trusted member of the staff and was respected by everyone. We have never had any complaints regarding his behaviour,” the school principal said.
Nigerians protest

Meanwhile, a group of Nigerians protested in front of the school.

They told the authorities that the protest was not a violent one but to seek justice for the boy.

“If that child is brought to you, and he confirmed that he has made a complaint to you and you gave him sweet to make him not to report to his parents, tell us what will be our reaction to you?

“You know what you are doing. You are trying to defend the crime. Every week, this boy has been molested; inside the backroom, classrooms, and the bathroom.”

Posted by Unknown at 7:34 pm
Email ThisBlogThis!Share to TwitterShare to FacebookShare to Pinterest
Labels: InternationalNews