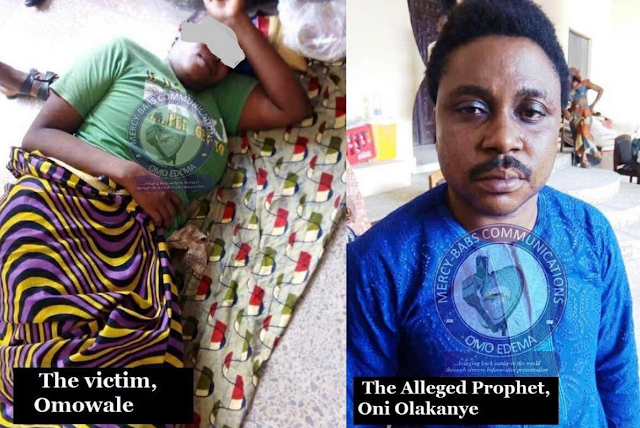 An Ekiti State pastor has been accused of causing injuries to a woman, Mrs. Omowale's private part, after he allegedly poured a liquid substance into her vagina during deliverance.

In an interview with Omo Edema of Voice 89.9FM, she said: “I live in Lagos. One day, my younger brother called me that there was a prophecy from his Prophet, Prophet Oni Olakanye of CAC Palace of Mercy, Mathew, Olokuta, Ado-Ekiti, that I would need to come down to Ado-Ekiti for prayers concerning my infertility.

I have married since 2011, but no child. So I discussed the issue with my husband and he allowed me travel to visit the prophet. When I got to the prophet, a few days later, he first prayed with me at the church reception.

He subsequently called me down into one of the rooms in the mission house where he placed a mirror under my private part—the exercise he called inspection, and later poured some liquid substance in my private part and fingered it in by himself.

He therefore took me to bathroom where I bathed on a mortar with a black soap and native sponge while he stood in with me. He demanded for N50,000 which I gave to him on the same day.

Lastly, he gave me a ball-shaped substance to insert into my private part in the bedtime when I get home. I did according to his instructions. Since then, my private part has been badly affected with wounds without cure yet."

However, while speaking with Omo Edema, Prophet Olakanye said: “I know her, but not all her allegations against me were true. I collected N50,000 to work for her and to ensure she has child in life. The substance I gave her to insert into her private part; she didn’t use it according to my instruction."

Posted by Unknown at 8:24 pm
Email ThisBlogThis!Share to TwitterShare to FacebookShare to Pinterest
Labels: NijaDrama