Married Lovers Found Dead While Copulating In Their Car In Lagos 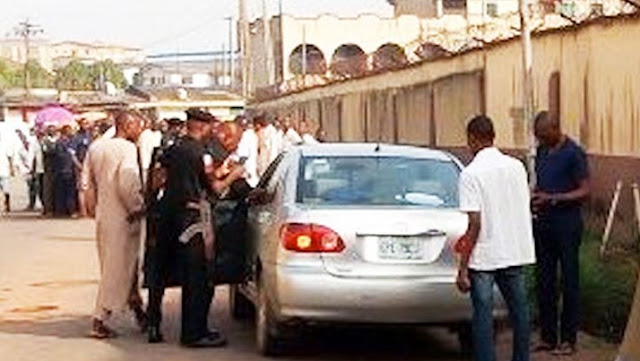 Abisogun Leigh Street, Ogba, Lagos State was the cynosure of all eyes on Sunday when two apparent lovebirds were found dead in a Toyota Corolla parked by the roadside.

Although the names of the deceased had yet to be revealed, they were said to have been respectively married.

PUNCH Metro learnt that the man was found in the driver’s side, half naked, with his private parts showing, while the woman, who wore a gown, reclined in the passenger seat next to him.

The scene of the incident was behind the headquarters of the Area G Police Command, Ogba, Lagos State.

Our correspondent gathered that a tricycle rider, who was plying the street, noticed that the headlamps of the car were on around 8.30am.

When the light remained on about 30 minutes after, the rider reportedly drew the attention of an executive member of the National Union of Road Transport Workers to the car.

It was gathered that the executive member and the rider went to the scene, peeped into the car and observed that the lovers were motionless. They were said to have immediately alerted the police at the command.

The car had been moved to the premises of the Area G Police Command when our correspondent visited the scene around 2.30pm, while the corpses of the duo were said to have been deposited in a morgue.

The NURTW member, Adewale Sofuyi, told PUNCH Metro that he alerted the Area G Command to the incident.

He said, “A tricycle rider approached me around 9am. He said the headlamps of a Toyota Corolla by the roadside were on and that he had knocked at the car door without getting response from the occupants.

“I followed him to the scene and confirmed what he said. The man wore a shirt only; he did not cover his private parts. The woman was in a gown. They were both in the front seats. The seat where the woman sat had been adjusted so that she reclined on it. From all indications, they had had sex with each other before their deaths.

“I went to report at the area command and some policemen followed me. When they opened the car, a bottle of an alcoholic brand – Best – was found there. Their phones were also recovered. They moved them to the back seats and drove to the station. The police contacted their families through their phones.”

Sofuyi stated that when families and relatives of the deceased arrived at the command, they were shocked to know they were in an amorous relationship.

“According to the families, both of them lived in the same building in Ogba. The woman’s husband said he had suspected that she had extra-marital affairs, but decided not to confront her.

“The man’s wife is a nursing mother. She cried profusely. I learnt that the man’s father is the landlord of the house where they both lived.”

Our correspondent, who went to the Area G Command, was told by the policemen at the entrance that the Area Commander was not around.

“She (Area Commander) went to the police command headquarters in Ikeja over the incident. You can come back,” one of the policemen said.

He, however, said he had yet to be fully briefed on the matter.

He said, “They (the lovers) were taken to a hospital, where they were confirmed dead. Autopsies will be conducted on them, while investigation is ongoing to ascertain the cause of death. I don’t have their names for now.”

Posted by Lawrencia at 7:02 am
Email ThisBlogThis!Share to TwitterShare to FacebookShare to Pinterest
Labels: NijaDrama