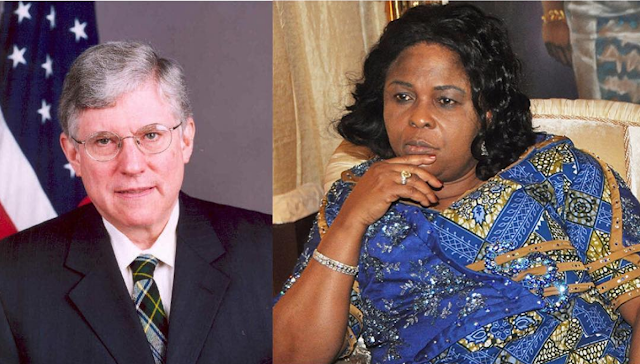 A former United States Ambassador to Nigeria, John Campbell, has described former President Goodluck Jonathan’s wife, Patience, as being arrogant and flamboyant when she was Nigeria’s first lady.

In a piece he wrote on Friday, ‘Nigerian President Buhari’s Sisyphean Efforts’, and posted on Council on Foreign Relations’ website, Campbell also wondered how Jonathan’s wife became wealthy having spent most of her life as a civil servant.

The ex-US envoy stated, “Patience Jonathan as the first lady was flamboyant, arrogant, and widely disliked. She has yet to be convicted of a crime. However, it is curious how a person who spent most of her career in public service could accumulate an acknowledged $35 million in a poor country.”

The Economic and Financial Crimes Commission is currently investigating Jonathan’s wife and has frozen four bank accounts belonging to her, while some property belonging to her have been seized. Among other actions taken by the EFCC was the freezing of Jonathan’s $35m.

The former first lady also claimed that the EFCC had frozen bank accounts belonging to some of her relatives, including that of her late mother, and accused the anti-graft agency of waging a “psychological war” against her for supporting Jonathan’s re-election bid in 2015.

“The Committee on Public Petitions in the House of Representatives has issued a warrant for the arrest of Magu(EFCC boss) because of his failure to appear before them with respect to a petition by Patience Jonathan. The committee’s move appears to be led by southern, Christian, PDP representatives.”

According to him, there is a tradition in Nigeria of presidents using the EFCC and other anti-corruption agencies against their political enemies.

“While it is true that under President Buhari, most of the high-profile investigations have been of PDP former officials in the Jonathan administration who are predominately Christian, these people were also, of course, in positions where they could loot public funds. Further, Christians dominated the Jonathan government, though the EFCC has also investigated Sambo Dasuki, Jonathan’s Muslim national security adviser, who remains under house arrest,” Campbell noted.

Posted by Unknown at 11:03 am
Email ThisBlogThis!Share to TwitterShare to FacebookShare to Pinterest
Labels: NationalNews