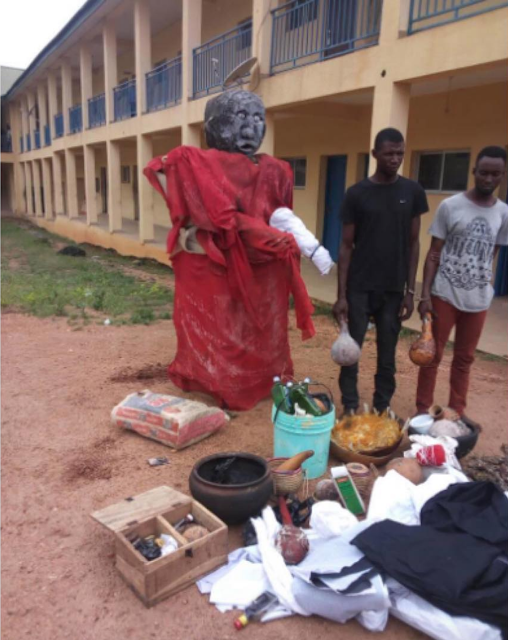 The Osun State Police Command Wednesday paraded two people suspected to be ritualists who specialize in duping and defrauding unsuspecting members of the public under the pretence of being herbalists.

The two suspects paraded by the state commissioner of police, Mr Fimihan Adeoye at the Force headquarters, Osogbo are Yusuf Taofeek, aged 21 and Jimoh Sherif, 20. Fimihan said the suspects were arrested on 6th October, 2017, upon tip-off by some vigilant residents of Jamodo junction, Ifon-Osun, where their shrine was uncovered by the police.

He said it was revealed to Police Operatives that some cultists /ritualists with code name “ZONE II” (Two) at Jamodo junction, Ifon-Osun, headed by one Sehidu Aliu, also known as ‘Alaga’ who is presently at large, usually assemble at their den.

He said they brandish guns and cutlasses before their victims. It was disclosed that most of the victims were those who patronised them for money rituals.

According to the CP, “the syndicates specialise in duping and defrauding unsuspecting members of the public under the pretence of being herbalist and to make money rituals for them.”

Posted by Lawrencia at 9:23 pm
Email ThisBlogThis!Share to TwitterShare to FacebookShare to Pinterest
Labels: Crime