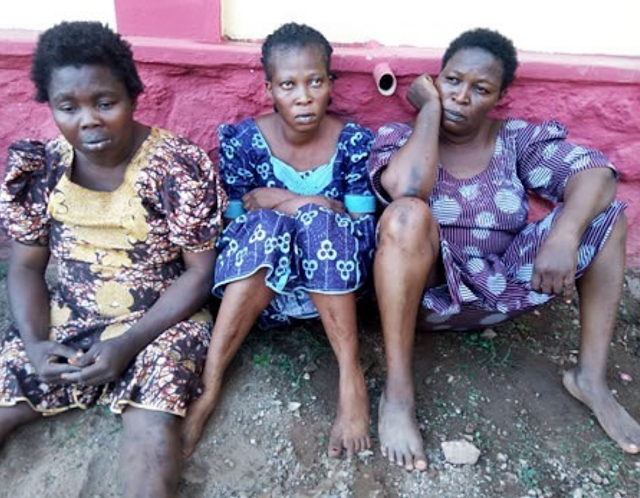 Olubunmi Funke, a single mother, on Tuesday disclosed that she sold her three years old daughter to one Abibat Oyesanya, a member of child trafficking ring to enable her offset a crippling debt burden.

Funke who said she even took to prostitution to raise money to pay the debt when her husband sent her away from matrimonial home, added the syndicate who allegedly specialized in child stealing and kidnapping in South West, bought the little girl off her for N280,000.

She was paraded along with two other women, Abibat Oyesanya and Morenike Shittu in connection with trading in children. “I gave out my three year old daughter to Abibat Oyesanya who is into local adoption business.

But she promised me that I would be allowed to visit my daughter once in three month. I am a prostitute. I engaged in prostitution after my first husband sent me packing. So, I decided to give out my daughter to woman who gave me N280, 000.

I used the money to offset my debt. The woman also requested for more children based on more demands for those adopting children. That is why I kidnapped the baby girl in Bodija, Ojurin, Ibadan, and brought it to the woman.”

On her part, Oyesanya, 51, revealed that her accomplice, Olubunmi, had brought one of her children to her and that the child was sold for N300,000 to a policewoman whose whereabouts could not be traced.

Oyesanya told newsmen that she gave Olubunmi a cash sum of N280,000 as payment for the child.

Posted by Lawrencia at 10:45 pm
Email ThisBlogThis!Share to TwitterShare to FacebookShare to Pinterest
Labels: Crime