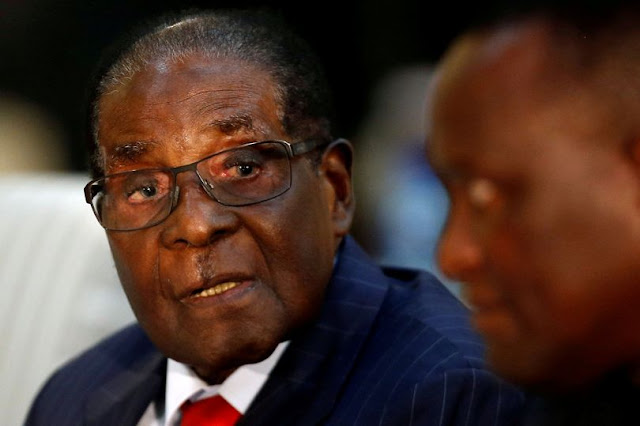 Robert Mugabe has been sacked as a goodwill ambassador for the World Health Organisation (WHO) after just four days.

It follows outrage from donors and rights groups over the appointment of the Zimbabwean President, 93, blamed for destroying the country's economy and presiding over human rights abuses during his 37-year stretch in power.

WHO Director-General Tedros Adhanom Ghebreyesus, who made the appointment at a high-level meeting on non-communicable diseases (NCDs) in Uruguay on Wednesday, said in a statement that he had listened to those expressing concerns.

"Over the last few days, I have reflected on my appointment of H.E. President Robert Mugabe as WHO Goodwill Ambassador for NCDs in Africa. As a result I have decided to rescind the appointment," Tedros said in a statement posted on his Twitter account.

Downing Street Mugabe's appointment as a goodwill ambassador for non-communicable diseases in Africa was "surprising and disappointing" and that it risked overshadowing the WHO's global work.

The United States, which has imposed sanctions on Mugabe over human rights violations, said it was "disappointed."

Several former and current WHO staff said privately they were appalled at the "poor judgement" and "miscalculation" by Tedros.

In August, Mugabe has denied being a witch and poisoning a rival with toxic ice-cream.

The President had been accused by opponents of casting an evil spell on his deputy and potential successor Emmerson Mnangagwa, 74.

Mr Mnangagwa was struck down with severe diarrhoea after a political rally.

He was flown to South Africa for treatment where medics allegedly found traces of palladium, which had damaged his liver.

Palladium is a rare metal mined in Russia and South Africa. It is combined with platinum to make catalytic converters.

The deputy’s supporters believe he was deliberately targeted by Mugabe’s backers.

But the President has rubbished the claims and said: “During the armed struggle, we never had weak cadres like what we are seeing today. Now the talk of witchcraft is the order of the day.

“Some are even saying the president is a witch, how many did I kill?"

Mugabe, who has been in power since 1980, said it was normal for people to fall sick.

Posted by Unknown at 3:10 pm
Email ThisBlogThis!Share to TwitterShare to FacebookShare to Pinterest
Labels: InternationalNews