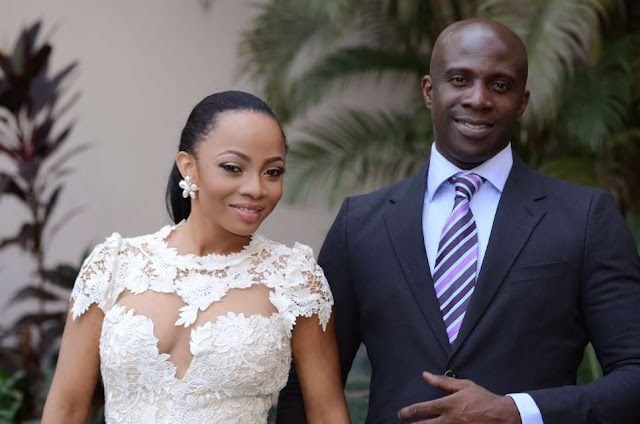 The 3-year-old marriage of Toke Makinwa to ex, Maje Ayida has finally been dissolved by an Igbosere High Court in Lagos. Toke filed for divorce in March 2016 on grounds that her husband committed adultery.

Ayida, according to Justice Morenike Obadina, filed an answer to the petition but did not give oral evidence to support it. She said the position of the law was settled as pleadings did not amount to evidence.

The judge said the issue of cruelty which the petitioner (Makinwa) relied on was established because of the “mental and emotional stress” she was subjected to by her husband.

He said Makinwa had sufficiently proven that the husband committed adultery and continued to flaunt his adulterous relationships even to her face. “I hold that the marriage has broken down on grounds of intolerable behaviour.

I hereby pronounce a `Decree Nisi’ dissolving the marriage between Makinwa and Ayida which was administered at the Federal Marriage Registry, Ikoyi, Lagos, on Jan. 15, 2014.

The order Nisi shall become absolute three months from today unless within that period sufficient cause is shown why it should not be made absolute,” Obadina said.

Makinwa also told the court her husband cheated wiith his mistress Anita Solomon, an affair which produced a child. She added that since they got married her husband had “behaved in a way she could not reasonably be expected to continue to bear”.

She also said the husband was cruel towards her. In her testimony,Makinwa said they got married in 2014, but ceased living together from Nov. 8, 2015.

She also told the court of an instance where her husband threatened separation and even drafted a separation agreement because she discovered that he bought a ticket for his mistress to travel to London.

The mistress (Solomon), who is the second respondent, refused to join issues with the petitioner.

Posted by Unknown at 6:53 am
Email ThisBlogThis!Share to TwitterShare to FacebookShare to Pinterest
Labels: Gists