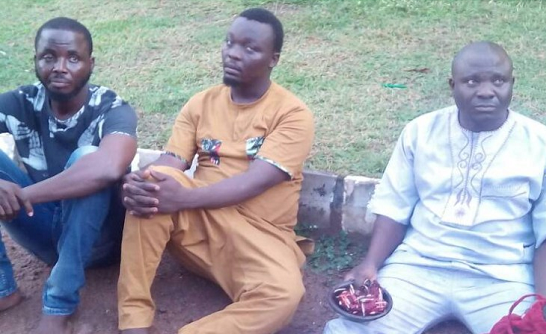 A member of a suspected syndicate, Adebayo Mubashiru, has confessed that he and his colleagues buy human parts, including skulls, eyes and teeth, for N12,000. The suspect was arrested along with three others in the Abeokuta  and Owode Egba areas of the state by the men of the Ogun State Police Command.

The state Commissioner of  Police, Ahmed Iliyasu, said the suspects specialised in killing for ritual purposes. Iliyasu, who paraded the suspects at the headquarters of the Federal Special Anti-Robbery Squad, Magbon, Abeokuta, said the four  suspects belonged to two  different ritual syndicates.

He said one of the syndicates, comprising Mudashiru and Rasheed Abass, who resided  in the Totoro area of Abeokuta, were arrested on Thursday by operatives of  FSARS.

Iliyasu said the two suspects were sighted on a motorcycle with a suspicious bag by policemen, who were on patrol, and they were stopped for a search.

He said the search led to the discovery of fresh and dried human parts, dead lizards and charms, adding that they were serial killers.

He added that two other suspects, Lateef Aremu and Kolawole  Shodipo, were arrested at the Owode-Egba area of the state  the same day.

Iliyasu said operatives of the FSARS received information about them and trailed them to their hideout, where they were arrested with the human skulls and bones.

Mudashiru confessed to our correspondent that he and the second suspect paid N12,000  for the human parts.

He, however, denied that they  were ritual killers, saying they were looking for how to get quick money.

He said, “We bought all the human parts for N12,000. We are not ritual killers. We want to get quick money by using the parts.”

On his own part, Aremu said, “I am a farmer and a herbalist, I am not a ritual killer.”

He said he had been in the business for almost 20 years, adding that the charms and other items were found on them were meant to help people.

He said he had once told Shodipo to bring human skulls for ritual purposes, which he (Shodipo) did.

They were said to have robbed a victim and made away withhis ATM card.

They allegedly inflicted machete cuts on him and forcefully got his pin number, after which  they withdrew N100,000 from his account.

Posted by Unknown at 9:06 pm
Email ThisBlogThis!Share to TwitterShare to FacebookShare to Pinterest
Labels: Crime