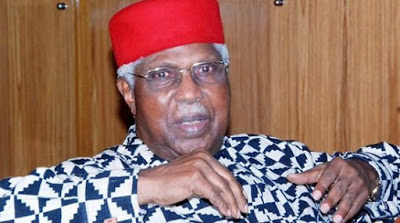 Mr. Buhari authorised the trip after being briefed on Mr. Ekwueme’s condition.The former vice president, who turned 85 in October, reportedly collapsed in his Enugu residence on Sunday.

On Monday, his family said in a statement that the former leader’s health was stable.

Mr. Buhari’s directive covers “the immediate charter of an Air Ambulance for the emergency movement and the cost of treatment”, a statement signed by spokesperson Garba Shehu said.

Posted by Unknown at 7:41 pm
Email ThisBlogThis!Share to TwitterShare to FacebookShare to Pinterest
Labels: NationalNews