Judge To Meek Mill: You're Going Back to Jail For AT LEAST 2 Years! 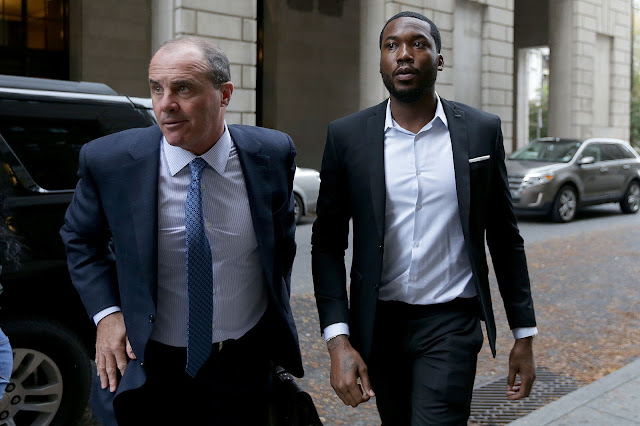 Meek Mill is sent BACK to the jail for probation violation, and he's already talking about wars on his freedom.

The rapper's recent arrests have landed him in jail once again. In 2015, his girlfriend Nicki Minaj testified in court saying she would do her part in keeping him out of trouble after he violated his probation born out of a 2009 drug case. He had just recently gone to jail for a few months for another probation violation.

The twosome broke up, and Meek was back to cutting up again. He was sentenced to house arrest in that 2015 violation.  He was arrested AGAIN after scuffling with an airport worker this past March. Then, in August, he snitched on himself by live recording himself speeding in the NY streets on his motorbike.  He was arrested for reckless driving, and it was all down hill from there.

He arrived at court this AM in Philly to receive his sentencing.  And the judge promptly sentenced him to a minimum of two years in prison.

Even though both cases were dropped, the judge said the arrests alone were violations -- and reportedly gave him 2 to 4 years in prison.

When you're on probation, you can't even break a nail.  Let alone break a law.

Posted by Unknown at 6:47 am
Email ThisBlogThis!Share to TwitterShare to FacebookShare to Pinterest
Labels: InternationalNews