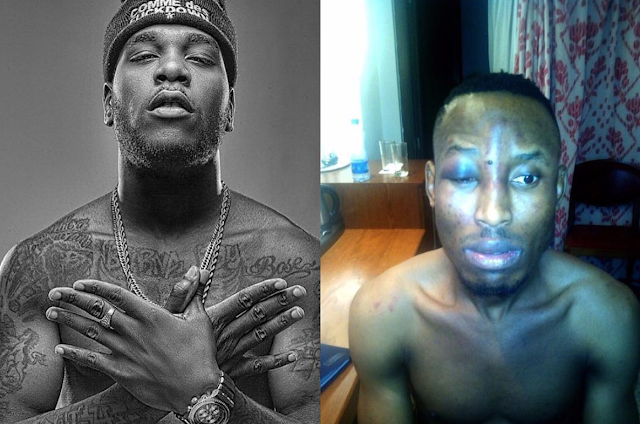 Three of the four suspects arrested by the Lagos State Police Command for allegedly robbing an artiste, Abiye Jumbo, aka Mr. 2Kay, have owned up to the crime.

The suspects confessed that they carried out the operation on the orders of Mr. 2Kay’s colleague, Damini Ogulu, aka Burna Boy.

The suspects are Balogun Ademola, Obina Igwe, Tunmise Omotore and Joel Kantiok, who claimed to be Burna Boy’s road manager.

This is just as the command asked Burna Boy to turn himself in, saying efforts to arrest him had proved abortive. 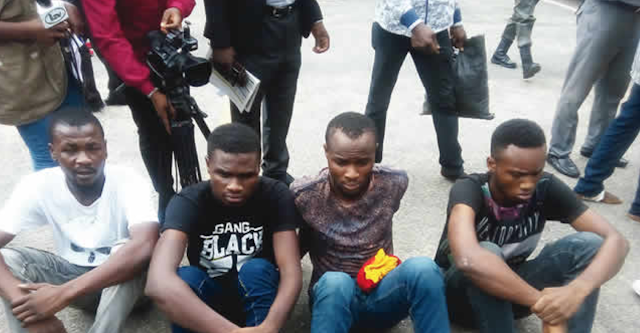 It had been reported that Mr. 2Kay was attacked by a gang on October 22, 2017 in his room at the Eko Hotel and Suites on Victoria Island after performing in the 2face’s ‘Buckwyld N Breathless’ concert held in the facility.

The assailants had disguised as room service officials to gain entry into the singer’s room.

They were reported to have beaten him up and dispossessed him of a wristwatch, gold jewellery, phones, among other valuables estimated at millions of naira, at gunpoint.

They were said to have tied him up and fled with their loot.

The state Acting Commissioner of Police, Edgal Imohimi, who paraded the suspects at the command headquarters in Ikeja on Monday, said the police tracked down the suspects through footage of Closed Circuit Television cameras installed in the hotel.

“The gang then tied him and his girlfriend up before leaving the room. During investigations, the girlfriend of one of the gang members, Nimota Mutajero, was arrested. Her confession led to the arrest of three suspects. They confessed that one Damini Ogulu aka Burna Boy, an artiste, through his road manager, one Joel Kantiock, contacted and paid them to rob Mr. 2Kay to teach him a lesson.

“Kantiock was subsequently picked up in his hideout at Zaria, Kaduna State.

“He confessed that his boss, Burna Boy, instructed him to look for armed men that could rob Mr. 2Kay. Burna Boy mobilised the gang with an initial cash sum of N50,000 and a subsequent sum of N50,000 when the job had been completed.

“I advise Ogulu aka Burna Boy, to report himself at the nearest police station since efforts to locate him at his residence at 7 Cheview Estate, Lekki, or any known hangouts, have proved abortive.”

In an interview with our correspondent, the paraded suspects, except Kantiock, confessed to participating in the attack.

Kantiock denied that Burna Boy directed him to arrange for the gang to attack Mr. 2Kay, adding that he was not aware of any disagreement between the artistes.

But the gang leader, Omotore, 27, who hails from Ondo State, said Kantiock invited him to deal with Mr. 2Kay on the orders of his boss.

He said, “On that day, I was at home when Joel (Kantiock) called me on the telephone and said Mr. 2Kay had to be beaten up. He said Mr. 2Kay had issues with Burna Boy. On getting to the hotel, he gave me the room number where Mr. 2Kay was. He led me and three others, including one Sunny, to the elevator and told a security man to open the elevator for us.

“We posed as room service officials, entered his room and beat him up. We tied him up and collected his phones, a wristwatch and some other things. I was paid N50,000.”

Igwe, 20, from Anambra State, denied carting away the victim’s valuables.

“My friend, Tunmise (Omotore), contacted me on the telephone. He said Burna Boy told his road manager that he was having a misunderstanding with Mr. 2Kay. I am also a fan of Burna Boy, so I decided to volunteer myself. Tunmise came to pick me at Bariga and we went to the hotel,” he added.

The command also paraded suspected killers of a chieftain of the All Progressives Congress, Emmanuel Uba, who was murdered in the FESTAC area of the state on July 21, 2017.

The police boss, Imohimi, said the case was transferred to the Inspector-General of Police Intelligence Response Team, which tracked down the suspects.

He added, “Luck ran out on the principal suspect, one Fatai Onifade aka Apase. A beretta pistol, one pump-action gun and two rounds of live ammunition, were recovered from the suspect.

“He confessed to the crime and led detectives to arrest three of his gang members – Michael Fashola, Mufutau Tokosi aka TK and Abidemi Adeleye, aka Baido. The suspects will be charged to court at the completion of investigation.”

Posted by Lawrencia at 1:40 pm
Email ThisBlogThis!Share to TwitterShare to FacebookShare to Pinterest
Labels: Crime