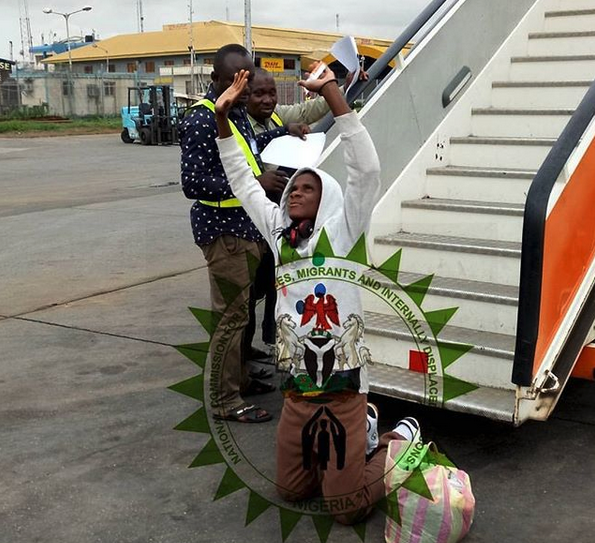 242 Nigerians were returned from Libya tonight 28th November, 2017, they were received by the joint effort of the NCFRMI, IOM, NEMA and other agencies.

According to NCFRMI, a total of 3,480 young Nigerians, mostly girls, was returned from Libya in the last 10 months, the National Commission for Refugees, Migrants and Internally Displaced Persons (NCRMI) has said.

The NCRMI South-West Zonal Director, Mrs Magret Ukegbu, told the News Agency of Nigeria (NAN) in Lagos on Tuesday that the returnees were received from Feb. 1 to Nov. 6.

Ukegbu said that the commission had been working with the International Organisation for Migration (IOM), National Emergency Management Agency (NEMA) and other relevant organisations in receiving the returnees.

“From February to the first week of this month of November, we have received about 3,480 young Nigerian deportees from Libya. “These young Nigerians, mostly girls from age 14, were received in different weeks during the period. “We have found out that the IOM, European Union (EU), Dutch and Swiss governments are involved in the return of these Nigerians from Libya,’’ she said.

She said that some of the young people returned with pregnancy.

According to her, there are more than 12,000 young Nigerians in prisons or stranded in different parts of Libya.

Ukegbu expressed worry at the situation.

She said that the commission was working to ensure durable integration of the deportees into the Nigerian society. “The commission believes that it is not enough to receive these young Nigerians; it is important that they are urgently given the needed mentoring, training and rehabilitation
- Source NaN

Posted by Lawrencia at 10:30 pm
Email ThisBlogThis!Share to TwitterShare to FacebookShare to Pinterest
Labels: NationalNews