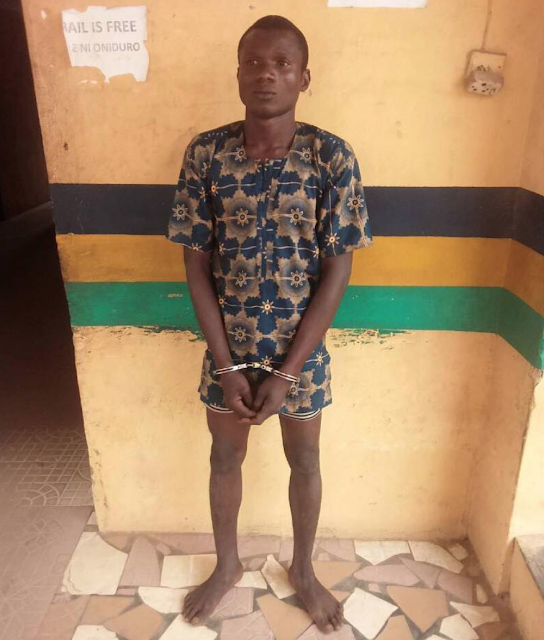 The Ogun State Police Command says it has arrested one Andrew Koku, a resident of Ayedere in the Obada area of Abeokuta, for allegedly killing his six-month-old baby, Precious Koku.

A police report indicated that the suspect was arrested following a complaint from the mother of the baby, Omowumi Teleda.

She was said to have lodged a complaint at the Adigbe Police Division that she went out briefly to see the first child she had with her ex-husband, leaving the six-month-old baby behind with the suspect.

She told the police that when she returned to the house, she met Precious dead.

The state Police Public Relations Officer, Abimbola Oyeyemi, said Precious’ mother explained further that the baby was hale and hearty when she left home, adding that she was surprised that that the baby had died when she returned.

The PPRO said, “The development made her to suspect her husband, who happened to be the only person with the baby.

“Consequent upon her complaint, the Divisional Police Officer, Adigbe division, Sunday Oladipo, detailed detectives to the scene and the suspect was arrested on December 24.”

Oyeyemi said on interrogation, the suspect confessed to the crime, but claimed that he killed the baby because he suspected that his wife wanted to leave him for the ex-husband, adding that if such happened, he would not be able to take care of the baby.

The police spokesman said the state Commissioner of Police, Ahmed Iliyasu, had directed that the case be transferred to Homicide Section of the State Criminal Investigation and Intelligence Department for further investigation.

Posted by Unknown at 10:48 am
Email ThisBlogThis!Share to TwitterShare to FacebookShare to Pinterest
Labels: Crime