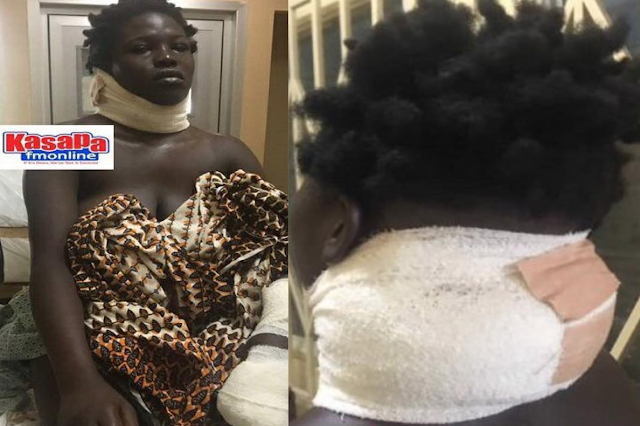 A construction worker identified as Raymond Boabey, has slashed the neck of his 18-year-old fiancée, Theodora Ansah, for serving him rice and a piece of meat on Xmas day in Ghana.

The mother of two however escaped death. Trouble started on 25th December over one piece of meat she served him.

According to Theodora, she didn’t have enough to prepare her Christmas meal so she served him rice with one piece of meat which the boyfriend wasn’t happy about, so he confronted her angrily and slapped her in the process and kicked her out of his home.

On Thursday, December 28, he visited her to apologize. He requested that they come back together and plan their marriage which she refused, but her response infuriated him and he started beating her till she managed to run leaving her daughter behind.

The victim said this prevented her from going far as she was scared he would harm the little girl. The suspect came back with cutlass with which he slashed her neck from behind and her left hand which she used to block the cutlass.

According to her, this attack is the third since she started a relationship with Raymond. She is currently on admission at the Korle Bu Teaching Hospital.

Posted by Lawrencia at 10:46 am
Email ThisBlogThis!Share to TwitterShare to FacebookShare to Pinterest
Labels: Crime