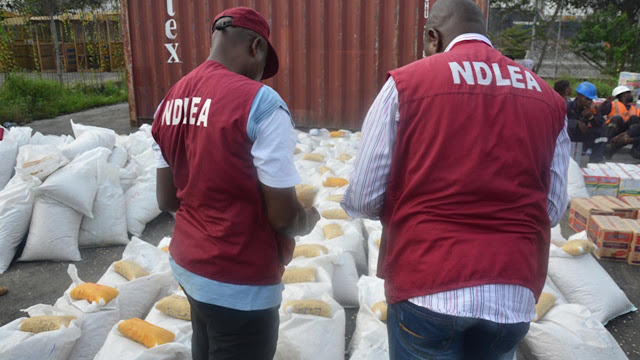 The Edo State Command of the National Drug Law Enforcement Agency has intercepted a shipment of cannabis. Two persons were also arrested in connection with the seizure, which the agency has valued at N70.7m.

The State Commander, Mr.Wakawa Buba, confirmed the arrest in a statement by the command’s Public Relations Officer, Mr. Mitchell Ofoyeju, on Friday. Buba noted that an investigation had shown that the truck departed Akure, Ondo State, en route to Abi in Delta State.

“This is yet another clever trick employed by drug traffickers. The cannabis was neatly concealed among building materials. But we were able to detect it based on intelligence report,” he said.

The driver of the truck, Monday Amusoga, 39, said he was paid N50,000 by a friend to convey the load to its destination.

The suspect, who is a native of Ndokwa-West Local Government Area of Delta State, also stated that he had hoped to use the money to provide for his wife and five children.

He said, “I am a driver but I have been jobless. My friend assisted me with this deal so l could meet my family’s needs. I am married with five children.

“Unfortunately, when we got to Benin, the officers in a Hilux vehicle arrested me and took me to their office in Benin, where they conducted a search and the cannabis was detected amidst the iron rods.”

The second suspect, one Omebu Kingsley, said, “I was paid N25,000 to assist the driver. I am married with a child. As a jobless secondary school dropout, l accepted the offer because Christmas is approaching.”

But the state commander said that the suspects were still under investigation and would be charged to court.

Posted by Unknown at 10:56 am
Email ThisBlogThis!Share to TwitterShare to FacebookShare to Pinterest
Labels: Crime