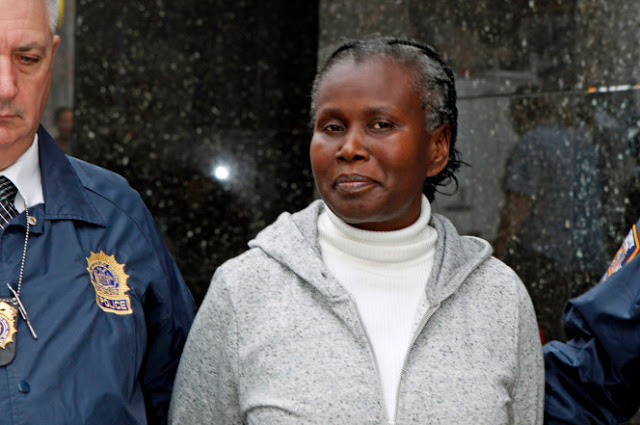 A Nigeria-born doctor who ran a sham health clinic in Queens with no visible staff or patients was charged with scamming over $370,000 in public funds and using the cash to renovate her own property and ship vehicles back to Nigeria, authorities said.

Dr. Dorothy Ogundu, whose government connections provided her non-profit with a steady stream of grant money, surrendered herself and appeared in Queens Supreme Court on Thursday morning.

The Post first revealed Ogundu’s scams in April 2012 when reporters found the clinic padlocked during business hours and identified the politicians that were funneling her money.

She is charged with using her non-profit Angeldocs to collect 12 govenrment grants to run programs and improve the facilities of a Holliswood church she claimed to have turned into a health clinic, the state Attorney General’s office said Thursday.

“Dorothy Ogundu pocketed hundreds of thousands of city, state and federal taxpayer dollars intended to help those who need it most with their health care costs,” said state AG Eric Schneiderman.

The Post reported in 2012 that Rep. Gregory Meeks secured federal grants for Angeldocs totaling $380,500 for renovations and programs and a state member item from Assemblywoman Vivian Cook went to renovate a second-floor kitchen.

To score cash from the capital grants Angeldocs received, Ogundu claimed that she was building a state-of-the-art demonstration kitchen and making other capital improvements to a building that she falsely claimed was used by Angeldocs, the AG’s office said.

Instead, the scammer allegedly received kickbacks on the kitchen project from a contractor and diverted other capital grant funds to pay the mortgage on her building along with other personal expenses.

Ogundu was released without bail and ordered to return to court March 4.

Posted by Unknown at 10:28 am
Email ThisBlogThis!Share to TwitterShare to FacebookShare to Pinterest
Labels: InternationalNews