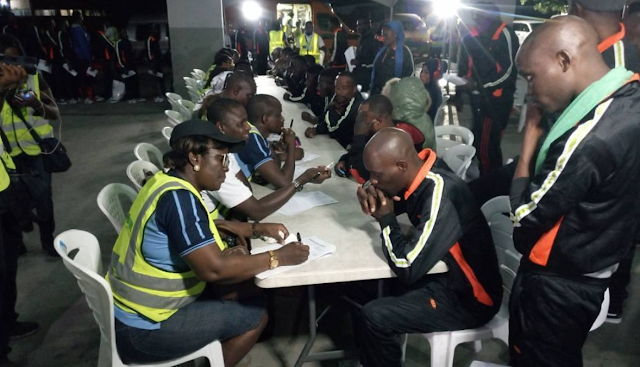 A total of 401 Nigerians were returned on the 5th of December aboard 2 Flights from Libya landed at the Murtala Muhammed International Airport, Lagos. They were received by the NCFRMI, NAPTIP and logistics support provided by NEMA.

The returns were facilitated by the IOM under the EU Project.

The spokesperson for the Lagos Airport Police Command, Mr Joseph Alabi, said the returnees arrived aboard a Libyan Airlines aircraft at the Cargo Wing of the airport at about 1.30 a.m.

He said they were assisted back to Nigeria by the International Organisation for Migration and the European Union after being stranded in the volatile North African country en route Europe.

Posted by Unknown at 12:50 pm
Email ThisBlogThis!Share to TwitterShare to FacebookShare to Pinterest
Labels: Gists