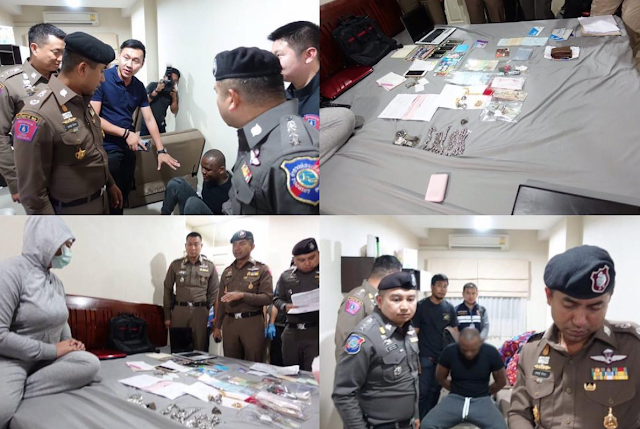 A Nigerian scammer known as “Star Boy,”has been arrested in Bangkok. He was arrested yesterday for targeting lonely Thai gents by pretending to be a beautiful American female soldier on Facebook. Antonio Jose Carlos and his Thai girlfriend, 20-year-old Sukanya Sakaew, were caught at their apartment in the Chaengwattana area as a part of the government’s crackdown on foreign criminals.

Police found six mobile phones and a few bank books at the apartment, which had a circulating fund of THB3 million (nearly US$92,000).

Police investigators said “Star Boy” was engaged in ongoing conversations with 38 middle-aged Thai men using a Facebook profile in which he presented himself as an American woman. It was unclear how much money he had managed to con out of them.

Follow-up investigations yesterday ultimately saw the arrests of five other members of the so-called Star Boy gang, all Nigerian nationals.

Pol. Maj. Gen. Surachet Hakpan, deputy commander of the tourist police, said the scammers had played on their victims desperate need for romance and tricked them into transferring money to their bank accounts.

Some had built social media profiles to give the appearance of a luxurious lifestyle, then asked victims to invest in a business with them.

Police have charged the suspects with fraud and putting false information into a computer system that causes damages to others. The investigation is ongoing.

Posted by Unknown at 1:22 pm
Email ThisBlogThis!Share to TwitterShare to FacebookShare to Pinterest
Labels: InternationalNews