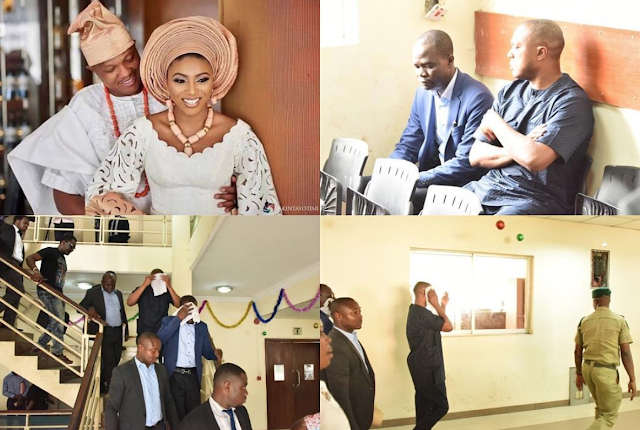 The Lagos State Government on Wednesday arraigned a brother of late founder of GTB and property developer, David Olumide Aderinokun and a staff of the New Town Development Authority (NTDA), Balogun Adeniyi Abdul-Wakil, before an Igbosere Magistrate Court over alleged conspiracy, forgery, stealing and property fraud on parcels of land in Lekki Peninsula estimated at 2678.068 square metres.

Aderinokun, trading under the name and style of Davade Properties, was alleged to have conspired with others now at large sometime in February 2016 to commit felony to wit stealing, forgery and obtaining money under false pretence.

According to the charge, Aderinokun criminally converted a piece of land measuring approximately 1764.44sm in Lekki, for his use.

He was alleged to have forged a Deed of Assignment with file number DLS/GC/110323 with the intention of using same to defraud unsuspecting members of the public.

Also, Aderinokun was alleged to have fraudulently obtained N18m from one Mrs Jumoke Fola-Alade on the pretence that he was the owner of the said property.

In the other charge, Aderinokun and Abdul-Wakil were alleged to have conspired with others now at large to fraudulently convert a piece of land measuring approximately 913.628sm in Lekki, for their use.

After the charges were read to them, the defendants pleaded not guilty. In her ruling, Magistrate Oshin admitted Aderinokun and Abdul-Wakil to bail in the sum of N10m and two responsible sureties in like sum.

The defendants were also ordered to be remanded in Kirikiri Maximum Security Prison pending the perfection of their bail conditions. The matter was subsequently adjourned to February 2, 2018 for trial.

Posted by Lawrencia at 9:39 am
Email ThisBlogThis!Share to TwitterShare to FacebookShare to Pinterest
Labels: Crime