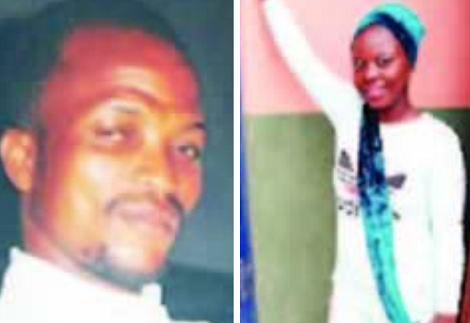 PUNCH Metro learnt that the suspect beat the 28-year-old to death during a disagreement at their home and dragged her corpse on the ground to a place near the community well, where he buried her.

Neighbours were said to have been frequently called in to settle disagreements between the couple until tragedy struck. A source said that the victim might have been killed over her plan to travel overseas in January 2018.

According to him, the couple have been married for some time now and they have three children together. I cannot explain how they met and married because while the man is a bricklayer, the wife was a graduate. They had been having a series of domestic problems and neighbours were always called in to resolve their fights. In fact, the quarrel got so critical that the woman’s family advised her to separate from him because they were not compatible, but she refused.

Late last year, she announced that she would be travelling abroad in January and the man became annoyed and vowed to end her life. On December 14, 2017, they had their usual disagreement and the man beat her to death. Ostensibly to deceive law enforcement agents from linking the death to him, he dragged her corpse far from their house and buried it beside a well. The corpse was later exhumed and the police were informed. The suspect had fled the house just as the case was transferred from the Morogbo Police Division to the command headquaters, Ikeja.

Efforts by residents and family members of the deceased to find the suspect had yet to be successful. The father of the victim, Mr. Atewologun Kalejaiye, had been inconsolable since the death of his daughter and called the police to give the family justice.

The state Police Public Relations Officer, SP Chike Oti, confirmed the incident, adding that the matter had been transferred from the command to the State Criminal Investigation and Intelligence Department, Yaba.

Posted by Unknown at 1:22 pm
Email ThisBlogThis!Share to TwitterShare to FacebookShare to Pinterest
Labels: Crime