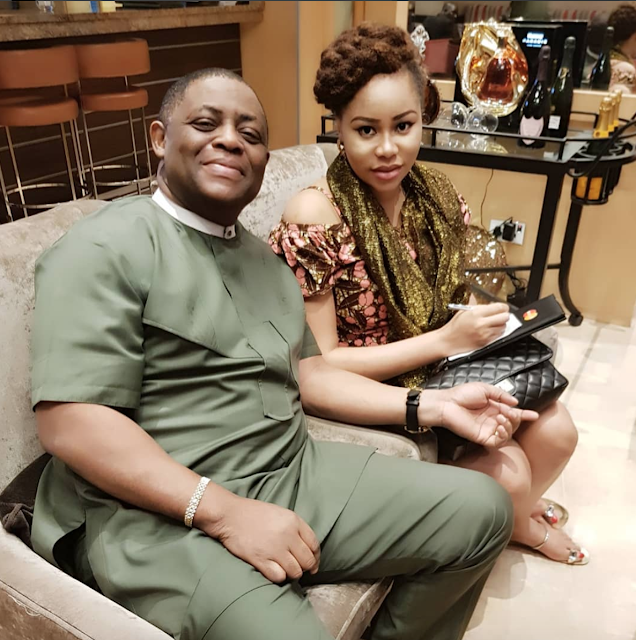 According to a report by Saharareporters, the 3-year-old marriage between former Aviation Minister, Femi Fani-Kayode, and Precious Chikwendu has hit the rocks and threatening to explode in dramatic fashion.

According to S.R, to cover up the abuse of his current wife, Fani-Kayode, who had had three failed marriages, has used a prophesy given by Apostle Suleman for 2018, to cover up.

The report reads further: "In reality, unknown to many, Fani-Kayode had accused his wife of infidelity. The woman, disclosed family sources, is said to be pregnant with a set of triplets.

However, the husband is said to be denying responsibility. The former minister, in a text message to members of his family and friends to him and his wife, said the man responsible for the pregnancy, said Mr. Fani-Kayode, is a US-based DJ.

Also in the text, which had the family of the former National Security Adviser, Colonel Sambo Dasuki, in copy, the former minister told friends that he no longer wants to have anything to do with the wife, advising their friends not to render financial assistance to her.

"No friend of hers can remain mine. I urge you to be very careful of this mad, ungrateful, deceitful and treacherous woman," he warned friends.

Fani-Kayode started physically abusing Precious from the first year of the marriage, a fate that befell her three predecessors. He was said to have ordered her to abort the pregnancy that resulted in their son.

Precious ignored him but got savage beating. It has grown worse with the allegation of infidelity. She is also said to have been relieved of the Mercedes Benz G-Wagon bought for her by Mr. Fani-Kayode.

Precious is back to driving 2009 Honda car and has had her police escort withdrawn by the husband. Prophet TB Joshua is said to have waded in and invited Precious to Lagos.

But all the horrors Precious has been subjected to are masked by the husband's extravagant show of affection on Facebook. This conveys the impression that things are smooth with them, a tactic he used in the case of his 3 ex wives."

Posted by Unknown at 1:15 pm
Email ThisBlogThis!Share to TwitterShare to FacebookShare to Pinterest
Labels: Gists