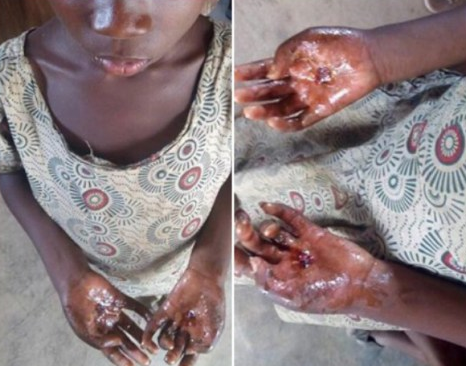 The Nigeria Security and Civil Defence Corps in Osun State have arrested a 54-year-old grandma,  Mrs. Victoria John, for allegedly burning the two palms of her granddaughter with hot charcoal.

Our correspondent gathered that the victim, Kehinde John, who is a primary 3 pupil at the African Church Elementary School in Erin Osun, reportedly ate part of the food kept for one of her brothers.

This was said to have angered the grandma, who allegedly grabbed her and forced her hands on burning charcoal to teach her a lesson.

The cry of the girl, whose mother was said to have died while she was an infant, attracted neighbors who rushed to their residence and rescued her.

However, the two palms had been badly burnt and the girl was taken to Primary Health Care Centre in the town where the wound was treated.

He said the command had arrested the grandma and she would be handed over to the Human Trafficking and Child Abuse Department of the NSCDC for further investigation.

The commandant said the girl needed to undergo a surgery as soon as possible so that she could use the two hands again.

Aboluwoye called on wealthy Nigerians and organizations to help sponsor the surgery, saying the girl was from a poor background.

He said, “The grandma is supposed to be taking care of the girl since her mother died, but it is unfortunate that she is the one that caused her this pain. She needs surgery immediately so that she will be able to use the hands again. The grandma has been arrested and the girl is with us. But I want to use this medium to appeal to wealthy Nigerians to assist the girl so that she can undergo a surgery to be able to use her hands again.”

Posted by Lawrencia at 10:41 am
Email ThisBlogThis!Share to TwitterShare to FacebookShare to Pinterest
Labels: Crime