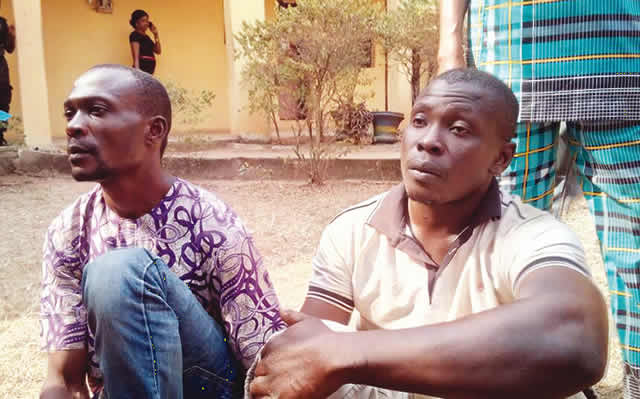 It was learnt that Nwankwo had paid Chuka the money to buy property for him in Asaba, the state capital.

PUNCH Metro learnt that Chuka denied receiving a credit alert from his bank after the victim paid the money, which started an argument between them.

The victim, who stayed in Anambra State, was said to have informed Chuka that he would travel down to meet him in Asaba with a deposit slip showing that he paid into Chuka’s bank account.

Our correspondent was told that the suspect gave the victim a meeting point, as they agreed to meet on January 7 to resolve the issue.

Meanwhile, Chuka was alleged to have hired Odiwe and some others with N100,000 to kill the businessman upon his arrival.

Nwankwo, who was unaware of the impending danger, was said to have arrived at the meeting venue from where Chuka lured him to a lonely place where the gang members were waiting.

He was reportedly attacked and killed; and the suspects fled the scene afterwards.

Chuka and Odiwe were among suspects paraded at the police command headquarters on Wednesday.

The state Commissioner of Police, Mr. Muhammad Mustafa, told journalists that the two suspects were arrested after painstaking efforts by the police.

He said, “Sometime in 2017, one Innocent Nwankwo, now deceased, of Nzemeghebo Crescent, Awada, Anambra State, paid the sum of N2m into a Diamond Bank Plc. account no: 0008438004, belonging to one of the suspects, Festus Chuka, for property in Asaba. But Chuka denied receiving the money.

“On January 5, 2018, the victim informed the suspect that he would come to Asaba with the deposit slip of the payment. The next day, Chuka hired the second suspect, Evans Odiwe, for the sum of N100,000 to kill the deceased on arrival at Asaba.

“On Sunday, January 7, 2018, when the deceased arrived at Summit Junction, Asaba, he met Chuka, who immediately took him to a pre-arranged lonely place, where the victim was killed by the duo of Chuka and Odiwe and others now at large. The suspects, who fled the scene after the dastardly act, were later arrested by detectives and they have confessed to the crime.”

Also paraded by the police commissioner was a 26-year-old man, Sekemia Fullpower, a native of Ayakoromor community, in the Burutu Local Government Area of the state, for attempting to attack a Fulani camp in Ogwashi-Uku, Aniocha South LGA.

He stated that the suspect was arrested with a polythene bag containing some cans of chemical substance suspected to be improvised explosive devices.

Mustafa said Fullpower was seen by residents making suspicious movements around the camp before he was intercepted and arrested with the polythene bag containing suspected explosives.

According to him, the suspect had confessed to the crime, saying that he was going to the prison facility at Ogwash-Uku where about five of his gang members were being held, to detonate the explosives and free his men.

Posted by Lawrencia at 9:55 am
Email ThisBlogThis!Share to TwitterShare to FacebookShare to Pinterest
Labels: Crime